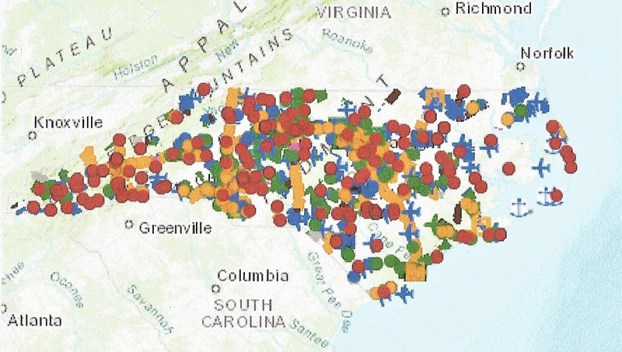 The large white space at the upper right of this North Carolina Department of Transportation map shows that Tyrrell County has been omitted from all major highway construction in the next 10 years. The interactive map can be viewed at http://ncdot.maps.arcgis.com/home/item.html?id=5fbe955dbc3248e3bf4fb6ea6fd344de (contributed photo)

That means, among other things, the project to four-lane U.S. 64 between Columbia and Manns Harbor is not even on NCDOT’s radar for the next decade.

Leroy Spivey, chairman of the Tyrrell County Board of Commissioners, lamented July 9 that, over the past six years the U.S. 64 widening project “has gone from fully funded to non-existent.”

He recalled a public meeting that was held in St. John’s Church in Alligator in 2013 in which NCDOT representatives talked directly with landowners about soon buying their homes along the proposed right-of-way.

“And today it isn’t even on DOT’s radar,” he said.

Jim Smith, a Texan who, along with his wife, is residing for a while at his ancestral homestead in Tyrrell County, overheard Spivey and related this story:

A man died and rapidly descended to the nether world. When the door opened, he was aghast —  a snowstorm was in progress and everyone visible was bundled up in parkas.

“What’s going on down here?” He asked incredulously.