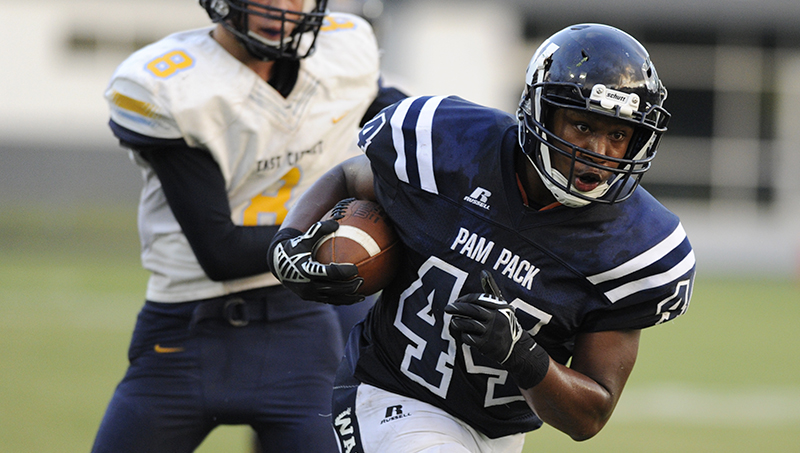 NOT QUITE ENOUGH: Michael Clark runs away from a defender during Washington’s week-one victory over East Carteret. Clark had another strong game running the ball against Conley, but it was enough to keep pace with the Viking offense, as the Pam Pack lost 56-45. (Ashley Vansant | Daily News)

In what was an action packed, high-scoring football game complete with slick plays, long touchdown runs and an hour-long lightning delay at halftime, the Washington

Although the score makes it look like the two teams battled it out from start to finish, that wasn’t the case in the second half. The last 24 minutes of the game belonged to Conley (1-2), outscoring Washington (1-2) 28-12 and leaving Washington head coach Jon Blank very unhappy with his team.

“We cracked mentally in the first half for some reason,” Blank said. “As soon as adversity struck us in the second half, we decided to get on our heels and our young kids got nervous and I don’t think they handled the pressure very well.”

After a couple of scoreless drives from both teams to start the game, it quickly turned into a back and forth shootout for the rest of the first half. The Vikings’ C.J.

Washington defense for a 61-yard touchdown at the 3:18 mark of the first quarter.

Johnson scored the first three touchdowns for the Vikings, but Washington’s Michael Clark and Montrice Selby joined in on the action. The duo combined for four first half rushing touchdowns, including a 46 yard TD from Selby where he looked like a man possessed carrying three Viking defenders into the end zone from inside Conley’s 15-yard line, propelling the Pam Pack into halftime with a 33-28 lead.

“Both those kids played really hard for us tonight and they made a lot of great plays,” Blank said. “Michael is a leader in our program, he has no quit in him and you see that after he breaks a lot of tackles in many of those runs. Montrice is also a tough matchup because we use him in a lot of different scenarios to get him the ball.”

Due to reported lightning in the area, the halftime went on much longer than expected and the game did not resume until 10 p.m. As the Washington fans waited in their cars hoping to see a Pam Pack victory, they were instead treated to the C.J. Johnson show in the second half.

Johnson started the third quarter like he did in the first, by outracing the Pam Pack defenders in the open field for the touchdown to regain the lead for the Vikings with a 35-33 advantage. From that point, Conley never looked back, as Johnson and Isaiah Gamble put the game out of the reach, each scoring a touchdown to extend to a 48-33 lead. The Pam Pack cut the lead to nine in the fourth period, but the Viking defense forced a pair of turnovers in the final frame, and Conley scored once again to seal Washington’s fate.

According to Conley head coach Nick Conner, his team did an exceptional job staying focused during the extended halftime while trailing. They were able to settle down, and it gave them an opportunity to evaluate what Washington was doing to them offensively and defensively, which helped them overcome the deficit and win the game.

“I think our kids are hard working, dedicated and focused,” Conner said. “We came out and did a great job adjusting and talking about some things at halftime and using that time as a bonus. Not wasting time not complaining about the time but using it as a positive for us and it helped us a lot.”

Washington will look to snap its two-game skid when they host the Northside Panthers (3-0) Friday night at 7 p.m. 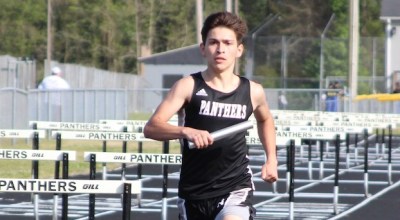