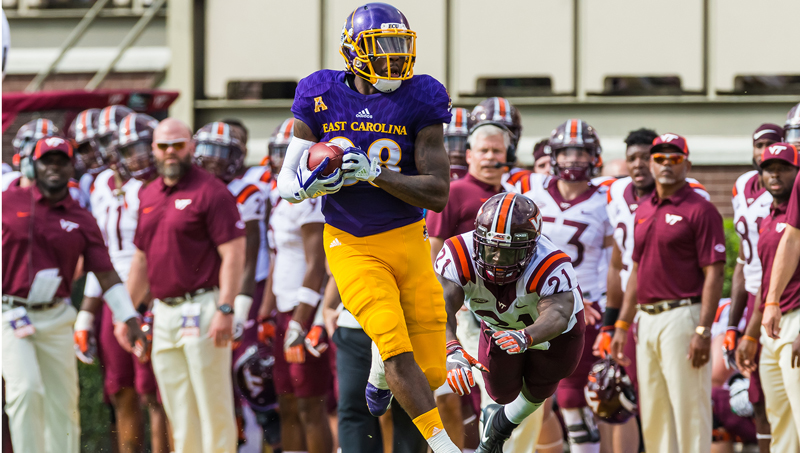 LEAD RECEIVER: Trevon Brown led ECU with 90 yards on four catches in yesterday's 41-19 win over the Tar Heels. The Pirates play Virginia Tech next week in Blacksburg, Virginia, where Brown will try to repeat his 2017 performance against the Hokies, when he caught four passes for 107 yards and a touchdown. (ECU Athletics)

GREENVILLE — In front of a 39,298-person crowd, the East Carolina Pirates used critical fourth-down stops and won one-on-one battles to shut out North Carolina in the second half of yesterday’s game to win 41-19 inside Dowdy-Ficklen Stadium.

“I thought the difference in our game tonight was how our defense played in the second half. I don’t know the last time I’ve been a part of a shutout in the second half (and) also part of an offense coming out and putting up 21 points and 20 points in separate halves,” ECU head coach Scottie Montgomery said.

Racking up 510 yards of offense (290 passing and 220 rushing), ECU (1-1) picked up 26 first downs and controlled the ball for just over 35 minutes to outmatch a struggling UNC (0-2) team that mustered just under 400 yards on the day and went 5-for-16 on third down and 1-for-3 on fourth down, including two failed conversions on back-to-back drives in the fourth quarter.

The Pirates found themselves up 21-19 going into the halftime break in a back-and-forth battle highlighted by UNC kicker Freeman Jones. Jones went 4-for-4 on the day, all in the first half, and made kicks spanning from 32-49 yards. Jones also converted the only extra point for UNC in the contest after the lone touchdown run from Jordon Brown early in the second quarter.

ECU involved its three veteran running backs in the ground attack yesterday, as Anthony Scott, Darius Pinnix and Hussein Howe ran for over 50 yards each. Scott rushed 17 times for 73 yards and picked up a six-yard rushing touchdown for the Pirates’ first score of the game with 9:21 remaining in the first quarter. Scott raised his yards-per-carry to 4.3 in the game after going a mediocre 2.8 in the game last weekend against North Carolina A&T.

Pinnix had five carries for 65 yards, including a 48-yard touchdown to break the score open at the beginning of the third quarter, increasing ECU’s lead to 28-19. Howe rushed 15 times for 52 yards and picked up a few key first downs throughout the game that kept drives alive.

The real story of the game however, may be third-string quarterback Holton Ahlers. Ahlers, who may end up redshirting later in the season, was put into the game and aided the run game with two rushing touchdowns of his own. His most important came on a fourth and one from the UNC 21-yard line at the beginning of the fourth quarter that resulted in a touchdown to put ECU up 35-19.

Davondre Robinson and Aaron Ramseur led the ECU defense with nine and eight total tackles, respectively. Robinson had six solo tackles to Ramseur’s one, but Ramseur had his pivotal stop in the drive following the Pinnix touchdown. He read the third-down pass play perfectly and stuffed the receiver to force the Tar Heels to punt for the second straight drive. The following drive ended with Ahlers’ fourth-down touchdown run.

“Defensively, what can I say, we are playing at a really high level right now,” Montgomery said. “Early in the first half, my adjustments, we just needed to maintain them a little bit better on third down and we did a great job of that.”

Cornerback Colby Gore was on pace to lead the Pirates in tackles and pass breakups, as he had three tackles (two solo) and two breakups on deep passes midway through the second quarter, but an intentional hit to the head from UNC running back Antonio Williams knocked him out cold on the field. Play was stopped for nearly fifteen minutes as medics and personnel stabilized him and moved him to a stretcher, where he was carted off the field and transported to Vidant Medical Center.

Williams was thrown out after the play was reviewed, a huge loss for UNC, as he had six carries for 96 yards at that point in the game. The Tar Heels turned to Brown after his ejection, but could not get the same momentum flowing for the remainder of the game. Gore is likely out for at least next weekend’s game at Virginia Tech and his status for the game will be announced tomorrow.

“I thought we outplayed them, I thought we played harder than they did. That’s what it comes down to. That’s critically important for a program,” Montgomery said.

ECU will travel to Blacksburg, Virginia, next week for a matinee matchup with the Hokies at 12:20 p.m.