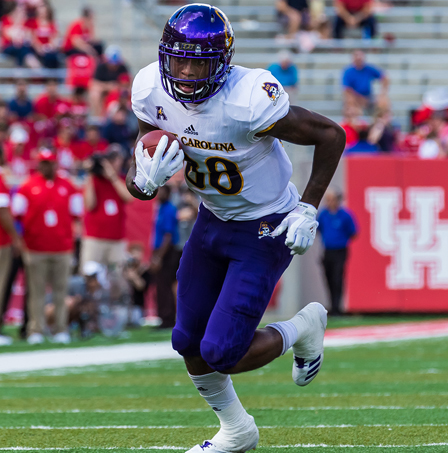 GO-TO RECEIVER: East Carolina’s Trevon Brown outruns a Houston defender last season. With a team-high 246 receiving yards and 17 catches, which is tied for the team lead, Brown has established himself as one of new starting quarterback Reid Herring’s favorite targets this year. (ECU Athletics)

East Carolina’s defense has outperformed each opponent it has faced this season, but its record still doesn’t show it. The Pirates dropped their game in South Florida last week, 20-13, after giving up just nine first downs in the game and possessing the ball for over 38 minutes. The Bulls’ touchdowns came on a 68-yard pass and an 80-yard run, with both plays being the result of defensive breakdowns that USF took advantage of. Excluding those plays, USF rushed for only 35 yards and passed for 115 yards in the entire game.

3 THINGS TO WATCH FOR