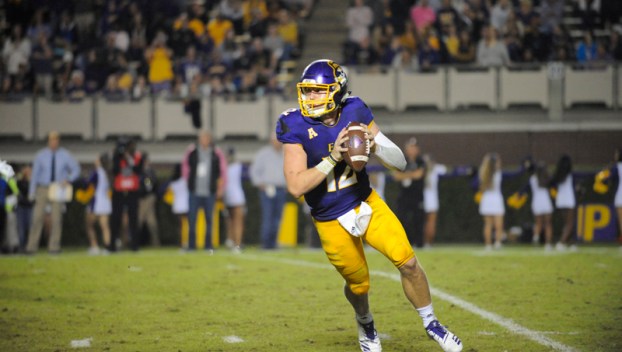 SHUT DOWN: Holton Ahlers met his match today, as the Cincinnati defense, ranked 10th in the nation, shut down the freshman and his fellow Pirates. (Sean Finnerty | Daily News)

Pirates have zero answers away at Cincinnati

CINCINNATI — East Carolina suffered a devastating road defeat today, as the Pirates failed to show up and look prepared for a road game this season yet again, falling to Cincinnati in a 56-6 defeat.

At the half, ECU (3-8, 1-7 American Athletic Conference) quarterback Holton Ahlers was the story of the rushing game once again, as it looked like the coaching staff abandoned the run and the duo of Hussein Howe and Anthony Scott again didn’t show much running the football. Ahlers led the team with nine carries for 21 yards, while Scott and Howe had seven carries combined for 16 yards through the first half.

Meanwhile, the Pirates gave up 454 yards in the first two quarters. Bearcat running back Tavion Thomas had his longest rush of the half come in at 24 yards, while carrying the ball 14 times for 63 yards. Charles McClelland had a 55-yard rushing TD, along with six total carries for 102 yards. However, Cincinnati (10-2, 6-2 AAC) didn’t even play its regular starting running back, Michael Warren II, simply in order to rest him.

To make matters worse, Ahlers went just 7-for-20 for 181 yards with one TD and one interception in the first half, before completing just one pass for three yards in the second half prior to being forced out of the game with an injury. Reid Herring came into the game in relief and showed again why the starter at the beginning of the season was benched. He threw two interceptions in his first five passes to the same cornerback, Arquon Bush, with one of them being returned for a TD, increasing Cincinnati’s lead to 56-6. Bush also recovered a fumble in the game, accounting for three of the five turnovers the Bearcats forced. Five turnovers today ties a season-high for ECU, with the other occasion coming against Central Florida in October.

Bearcat quarterback Desmond Ridder played just the first half after tossing 4 scores, three in the first quarter, for the most points allowed in the first for ECU all season (21). Ridder’s TDs came on throws of 10, 30, 57 and 2 yards to give Cincinnati a 42-6 halftime lead. Backup Hayden Moore played the entire second half, only needing to attempt 11 passes to close out the game for Cincinnati. He completed just five of them for 59 yards, but did add another TD as the Bearcats turned to use the run game more to end the game. Both Thomas and McClelland finished with more than 100 yards in the game, 106 and 114, respectively, en route to gaining the second-most yards in a game against ECU in its history. Cincinnati piled 641 yards on the Pirates, second to only Florida State, who gained 706 in 1982.

ECU’s lone score came from backup receiver Mydreon Vines’ only catch of the game, a Cincinnati defensive breakdown that allowed the 71-yard score midway through the second quarter. Running back Trace Christian came into the contest and led all ECU rushers with 25 yards on six carries, while Vines lead the Pirates in receiving yards. Trevon Brown chipped in with a team-high three catches for 46 yards. Wide receiver Xavier Smith received his first career start and teamed up with Leroy Henley to bring in two catches each, while Terrell Green and Christian brought in the only other catches of the game as ECU had a season-low 10 catches as a team for 220 yards.

As for Cincinnati, Kahlil Lewis lead all receivers with nine receptions for 203 yards and three TDs, his longest coming on a 57-yard score to end the first quarter. Wide receivers Josiah Deguara and Jayshon Jackson each added a TD en route to the Bearcats’ tenth win of the season.

ECU will play next Saturday at noon, away at North Carolina State, in a rescheduled matchup from the previously cancelled Atlantic Coastal Conference Virginia Tech game from September.

Seahawks blown away by Hurricanes