Pirates to take on Wolfpack days after losing head coach 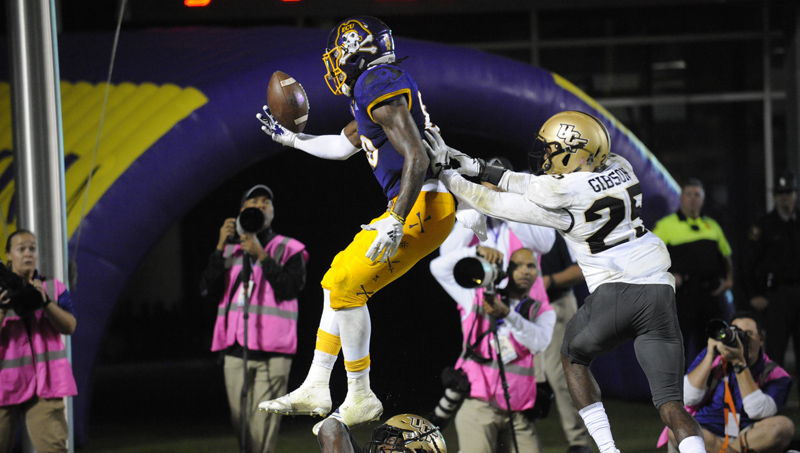 PLAYMAKER: Senior Trevon Brown has wowed Pirate fans with spectacular plays throughout his career at ECU when healthy and the recently named first team all-conference wide receiver will don the purple and gold for the last time Saturday, as the Pirates take on NC State in the season finale. (Sean Finnerty | Daily News)

East Carolina played arguably its second worst game in history after it gave up 641 total yards to Cincinnati in a 56-6 blowout loss last Saturday. Florida State in 1982 is the only team to post more yards against the Pirates. The Bearcats went up 42-6 in the first half and the Pirates’ lone TD came on a broken play from the Cincinnati defense in which wide receiver Mydreon Vines caught his only pass of the game for a 71-yard catch-and-run score. Starting quarterback Holton Ahlers went down after just a few plays into the second half and he (7) and backup Reid Herring (3) combined to complete just 10 passes in the game, a season-low for the Pirates. Going into the third quarter, Cincinnati benched its starting quarterback Desmond Ridder after he accounted for four first-half scores. The Bearcats also didn’t play their starting running back Michael Warren II, who didn’t have an injury, because they didn’t have to. Two of Cincinnati’s backups rushed for more than 100 yards each in the game, while ECU didn’t look like it had any running backs on the field again.

THREE THINGS TO LOOK FOR