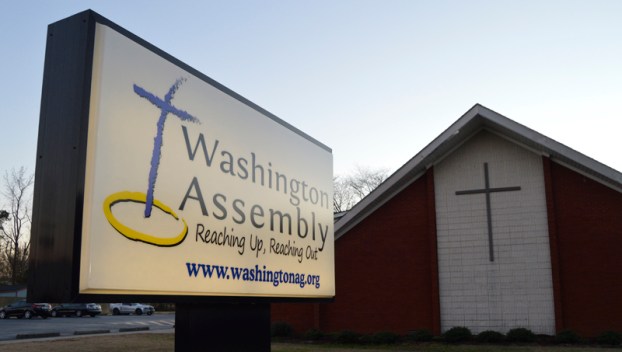 FOR THOSE IN NEED: The Washington Assembly of God will become a winter wonderland Saturday as the church hosts its inaugural Pack the Sleigh event. In return for donations of four canned food goods per child, families can have pictures taken with Santa. All donations will benefit Eagle’s Wings Food Pantry. (Matt Debnam/Daily News)

Santa Claus is coming to town this weekend at Washington Assembly of God, with a goal of loading his sleigh with something slightly different — canned food products for the hungry at Eagle’s Wings Food Pantry.

It’s all part of the Washington Assembly of God’s inaugural Pack the Sleigh event, scheduled to take place beginning at 1 p.m this Saturday at the church.

“Anybody can come, and as long as they bring four cans of food per child, they can get a picture with Santa and all the food will go to Eagle’s Wings,” Washington Assembly of God Pastor Daniel Haskett said. “We’ve got a big sleigh that a gentleman in our church has built, so we’ll just pack it full with the canned goods as they come in.”

After having their picture taken with Santa, kids can enjoy a variety of activities at the church, including coloring and cookie decorating. Depending on the weather, Haskett said inflatables might be included at the event as well. Following these festivities, the event will conclude with a special matinee performance of “Grinched,” the church’s 2018 Christmas production, at 3 p.m.

“It’s kind of like a follow-up to the story of the Grinch,” Haskett said.

Involving children, youth and adults, the production will feature music, drama and a heart-warming message, he said. With alterations to the script, the play has been somewhat adapted to represent Beaufort County. A second performance of the production will follow at 10:30 a.m. Sunday as part of the church’s regular service.

“It’s a fun day to get kids out here, get a picture with Santa, have some fun and support Eagle’s Wings and help those that are hungry in our community,” Haskett said. “We’re trying to be as involved in the community as possible. With this event, we’re really hoping to be a blessing to Eagle’s Wings and the people they reach out to on a daily basis.”

BELHAVEN ON PARADE: A cool and cloudy day on Saturday didn’t prevent the citizens of Belhaven and the surrounding area... read more