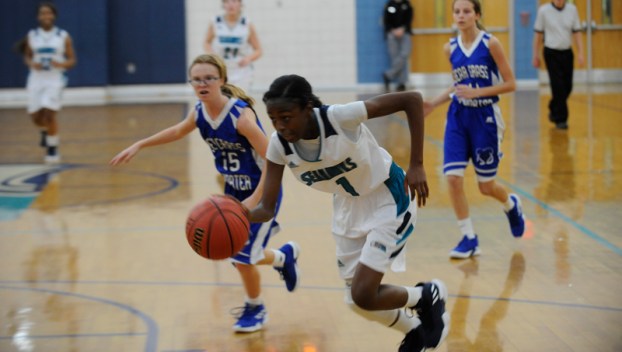 DEFENSE LEADS TO OFFENSE: Jasmine Blango heads towards the basket after coming away with a steal during Friday’s win over Bear Grass. Southside had 27 steals in the game. (Sean Finnerty | Daily News)

CHOCOWINITY — A dominating defensive performance from the Southside girls basketball team that saw the Seahawks come away with 27 steals led Southside to a 54-31 victory over Bear Grass Charter on Friday night, giving the Seahawks their second-consecutive win after opening the season 0-2.

“What I’m seeing right now, I’m seeing a lot of chemistry,” Southside head coach Milton Ruffin said. “They’re starting to play together on defense. We’re trying to help out there and we’re putting a lot of pressure on the ball, playing a lot of good team-ball.”

Playing man-to-man defense and pressing Bear Grass’s (0-4 1A Atlantic 5 Conference) ball handlers, Southside (2-2 1A Coastal Plains Conference) limited the Bears to single-digit points in nearly every quarter, until Bear Grass put up 12 points in the fourth. That same smothering defense also allowed the Seahawks to get their offense going, as they quickly turned their 27 steals into fast-break points. All of Southside’s players put in effort on the defensive end, evidenced by the fact nine of the 10 Seahawks that saw action had at least one steal on the night.

Shantel Cannon led the way for Southside, scoring 12 points, racking up six assists and swiping 10 steals. Freshman Jasmine Blango also had 12 points, while coming away with four steals. Laquisha Woolard was the other Seahawk with double-digit points, chipping in with 11 while also having four steals.

Southside’s points didn’t all just come as the result of Bear turnovers. Bear Grass attempted to press the Seahawks into turning the ball over as well, but Southside was able to break the press with quick, smart passing that resulted in easy baskets by a Seahawk unguarded underneath the basket. There were times when the Seahawks advanced the ball upcourt with out taking a single dribble.

Ruffin said being able to pass out of pressure in something his team has focused on recently.

“That’s what we’ve been practicing on,” Ruffin said. “We always tell them that good passing leads to easy baskets. They’re doing a great job of passing the basketball.”

Southside will return to the court after Christmas, as it will take part in the South Creek Christmas Tournament. The Seahawks will open with Camden County on Dec. 27 at 4 p.m.

Southside shuts down Columbia in a rout

CHOCOWINITY — Southside breezed to a 62-26 win over Columbia at home Wednesday night, overwhelming the Wildcats with its press,... read more