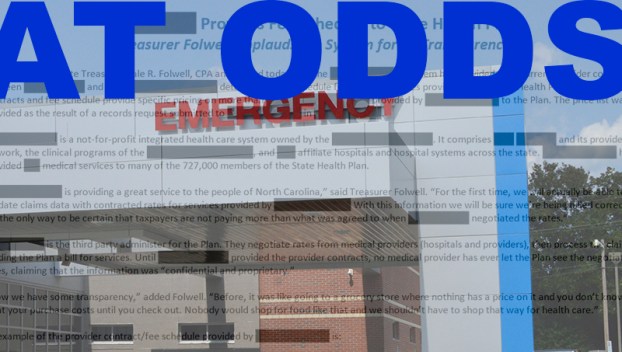 An effort to cut the cost of state employees’ health care has ratcheted up the tension between North Carolina’s treasurer and medical providers operating in the state.

Earlier this year, State Treasurer Dale Folwell directed Blue Cross Blue Shield of North Carolina — the State Health Plan’s third-party administrator — to cut medical provider rates by 15 percent on all major contracts being negotiated in an effort to lower health care costs now and be able to continue to pay for retired state employees’ health care in the future. According to reports from Pew Charitable Trust and S&P Global, the state’s future health care plan is less than 5-percent funded. By 2023, those liabilities, combined with rising health care and pharmaceutical costs, could make the plan insolvent unless something is done now, according to Folwell.

Medical providers, however, disagree with Folwell’s method of cutting reimbursements to hospitals and doctors to make up the shortfall.

“That’s a very damaging, quick way to fix the issues that have built up over a long period of time, and we feel like there is a better way to solve the issue than using a hatchet,” said Vidant Health CEO Michael Waldrum.

Waldrum said the cuts, as presented, would damage rural North Carolina the most. Unlike more populous areas, eastern North Carolina does not have a lot of excess resources, though medical providers operate under the same federal mandate that all patients be given care, regardless of the ability to pay.

“We operate on a thin margin for our system. That’s because we have to pay for those who can’t afford to pay,” said Harvey Case, president of Vidant Beaufort Hospital. “That’s why some of the costs are shifted to other people, because we are mandated. We did not move forward with Medicaid expansion, which would mean (currently uninsured patients) would have a chance to pay.”

For Vidant Health, the cuts would represent $40 million, according to Waldrum, which decimates the provider’s operating margin to approximately $12.5 million — money Vidant reinvests in the communities it serves. In Beaufort County, community reinvestment has resulted in a $6.5 million round-the-clock multi-specialty clinic in Belhaven to provide care after Vidant Pungo Hospital was closed in 2014 and a new emergency department unveiled at Vidant Beaufort Hospital in September.

“We share dollars, but for the folks of Beaufort County, our ED expansion was $17 million, and that wouldn’t have happened with these cuts,” Case said.

Case said those funds also take care of hidden hospital costs such as $800,000 being spent on replacing 92 in-room air conditioning units this year and nearly $1.5 million on elevators in the past three years at Vidant Beaufort.

Waldrum said the impact of the cuts, overall, would total approximately $1.4 million in Beaufort County.

“The biggest cut for us is a 19-percent decrease for obstetricians,” he said, adding that urology is the second-highest at 17 percent.

The cuts come as Vidant Beaufort has been trying to expand its services to pregnant and newly-delivered mothers.

A major concern is that the new provider reimbursement strategy could have lasting ramifications for eastern North Carolinian health care.

“Someone having the ability to decimate without oversight is the real fear. Is this the first of many (cuts)? Does this even solve the problem?” Waldrum asked. “More personal for us — if this goes through, we are going to have to react, and that reaction is decreased services in our communities or decreased employment in our communities. We will be viewed as abandoning our communities rather than (reacting to) an outside force.”

Folwell said he has reached out to providers from the start of the process, inviting them to work with him on the new strategy, and giving them the opportunity to shave costs on their own. What he received in return were not cuts but shifts to proactive practices that would result in less emergency department visits — a good thing for long term health care costs, he said, but will not offer savings in the short term. Based on the Medicare reimbursement plan, he said many medical providers will actually be paid more under the plan, including primary care physicians and mental health providers.

Providers have not been willing to work with him, according to Folwell. In his quest to find out exactly what the state is paying for under the State Health Plan, transparency has been severely lacking, he said. Repeated requests by his office to medical providers for actual costs of services have resulted in pages of redacted information, according to Folwell.

“We want to bring transparency and sunshine to something (on which) your readers spend at least 20 percent of their income,” Folwell said.

Transparency is one goal; funding the future State Health Plan is another. A third is actually lowering premiums for North Carolina families.

As head of the Local Government Commission, Folwell said he is very much aware of the needs of rural North Carolina.

“There’s no person … that has more constitutional and statutory reason to make sure that rural North Carolina has access to affordable health care, good public schools and reasonable water and sewer rates, because if you don’t have those things, you can’t get funding,” Folwell said. “I’m trying to figure out how rural hospitals, especially, can remain vibrant.”

The new provider reimbursement plan is slated to go into effect January 2020, but Waldrum said a more collaborative process is needed.

“We’re trying to stop this, and we think there’s a better long term solution,” Waldrum said.

All along the Washington waterfront, boats of every shape and size have been decked out in lights and festive decorations... read more