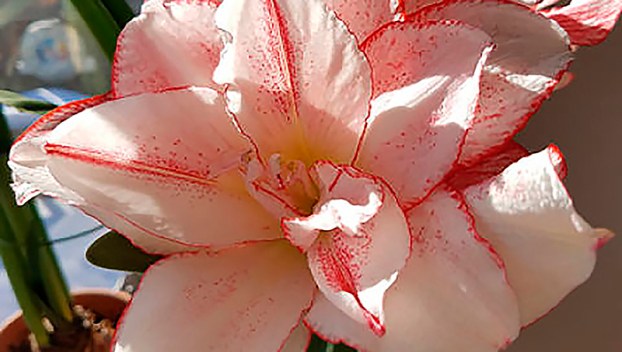 My amaryllis has bloomed and is gorgeous — what do I do with it now?

I attended a fundraising auction at Terra Ceia Christian School in early November. Folks from a five-county area attend this great event, in which items, donated from local churches, businesses, parents and staff, are auctioned off with the proceeds going to the school. There is a very wide array of items auctioned off from antique and/or refinished furniture to pies and cakes to farm supplies and even seed corn/soybeans. If you have never attended, I highly recommend you get this on your calendar for next year!

Terra Ceia, loosely translated, means “Where heaven meets Earth” or “heavenly Earth.” The area is aptly named if you have ever witnessed one of the amazing sunsets that could only have been created from heaven above! Dutch immigrants settled in the Terra Ceia area, around the early 1940s, seeking a place to grow flowering bulbs. They established Terra Ceia Farms to grow for the cut-flower industry and later established a thriving flowering bulb market. This year at the fundraising auction, my wife bought me an amaryllis bulb at the auction that had been donated by the flower farm. The bulb had already been planted and was just before sending up the flower stalk.

Although I knew what the amaryllis was, I had never grown one. I had to do a little research into the care of the bulb and flowers. As I did, the long flower stalk began to grow. My children and I watched and even attempted to measure the daily growth. Before long, we found ourselves impatiently waiting for the blooms to blossom. We had five blooms and we were making bets on how the colors would look. One by one they began to open, revealing a white flower with what could only be described as a sunburst pattern near the base of the flower. They were heavenly!

As we watched, we began to notice a second flower stalk starting to come up from the bulb. We are now waiting to see just how many blooms this one will have. This leads me to the question, “What do I do with it once the blooms are gone?”

First, it is important to understand that the plant does not normally bloom in the middle of winter; they typically bloom in the spring. The bulb has been forced to bloom early by keeping it in a cool, dry place for several weeks. Most spring bulbs need a period of cool weather to trigger blooming. This doesn’t mean that they cannot be grown outside but there are a few steps necessary to ensure success. When blooms begin to fade, cut the flower stalk off near the top of the bulb. Begin to fertilize using a liquid fertilizer mix once a week or use one application of slow-release pellets sprinkled on top of potting soil after bloom. Water when the soil feels dry, and keep inside until after the threat of frost has passed. Plant outside in a sunny-to-part-shade bed with well-drained soil. Plant as was planted in the pot with 1/3 of the bulb above the soil surface. Do not allow the bulbs to dry completely out. To help conserve moisture and reduce weed pressure, use a layer of mulch around the bulbs.

Once planted outdoors, plants will return to their normal bloom cycle. Amaryllis are adaptable to many sites and are deer and vole resistant. They are a wonderful addition to your landscape and will continue to bloom for many seasons!

If you are having an issue in your home garden or landscape, send your questions to Gene Fox, please email at Gene at gene_fox@ncsu.edu. Learn more on Facebook at the Blacklands Area Horticulture page or visit the Extension Office, located at 155 Airport Road in Washington.

The smell of charbroiled burgers in the air

Can you remember driving down Carolina Avenue as a teenager and smelling the aroma of charbroiled hamburgers? There was only... read more