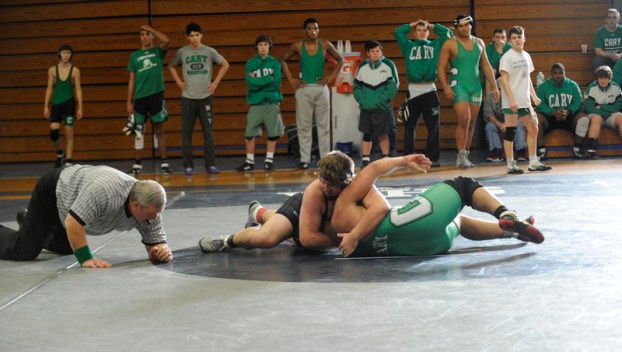 TAKING DOWN THE CHAMPS: Logan Nichols fights to pin his Cary opponent in the 220-lbs. division on Saturday as the rest of the Cary team looks on with concern. Nichols won via pin just seconds later. (Sean Finnerty | Daily News)

“I didn’t think we would have enough to win because Walt Gerard is in Cancun with his family on vacation and Gavin Woolard, one of my senior captains, he’s got issues going on with his knee,” Penhollow said. “We just shifted some people and we were fortunate enough that we’ve got some strong backup guys that we could put into position to eke out a win. Did not see that coming at all, but that’s the sport of wrestling; you don’t really know. You kind of have an idea, looking at matchups.”

The Pam Pack began the tournament by making light work of Pasquotank County, Edenton and South Central, defeating the trio, 76-4, 72-12 and 60-18, respectively. Washington then took on Cary, also undefeated until that point, in the final round. The squads finished tied 36-36 and were even on most tiebreaking criteria, with Washington scoring first in seven of the 12 matches, compared to the Imps’ five, to win the tiebreaker and the match, 37-36. 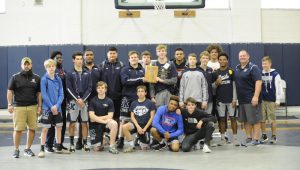 Thanks to Tristen Nixon and Dylan Modlin, the Pam Pack won the first two matches against Cary to take a 9-0 lead, energizing Penhollow’s team.

“We won the first two matches and all of the sudden my kids are getting a little amped up over there,” Penhollow said. “You know young people, they start seeing a few things go their way and the kids start getting a little excited, getting into it. That fast start was huge for us.”

Penhollow said the two biggest surprises were the performances by Logan Nichols at 220 lbs. and Khyric McCloud at 285 lbs. Nichols pinned his opponent, which went a long way in propelling Washington to victory, while McCloud fought hard to lose on decision. Despite losing his match, Penhollow said McCloud helped the Pam Pack win by not getting pinned by an opponent, Cary’s Davin Vann, who pins everyone he faces.

Cary actually won the past two Saleeby tournaments at Washington, edging out the Pam Pack two years ago, before comfortably winning by 20 points last year. Washington head coach Chris Penhollow said he brought up last year’s tournament right before the match against the Imps on Saturday, which he said was a “huge win.”

“I told the guys before the match, I said, ‘Last year I was totally embarrassed about how we wrestled Cary in the finals.’ We didn’t fight, we gave up seven or eight pins and they beat us by 20 points,” Penhollow said. “I said, ‘I just want you guys to compete hard and do what you do. And if they beat us, so be it.’ I said, ‘Let’s not just go out there and lay down and make it easy on them like we did last year.’”

Penhollow’s team responded with a performance he described as “the kind of effort as a team that’s going to get us to the state championship match this year.” Penhollow said the win over the Imps has seemed to motivate his wrestlers, as they now realize what they can accomplish.

“I think it lit a bit of a fire under them, so we’ll see how the last part of the season goes,” Penhollow said.

Washington hits the mats again this Saturday as it visits Edenton to compete in the Coach “O” Duals.

While schools are on break during the winter holidays, high school basketball stays in session as teams take part in... read more