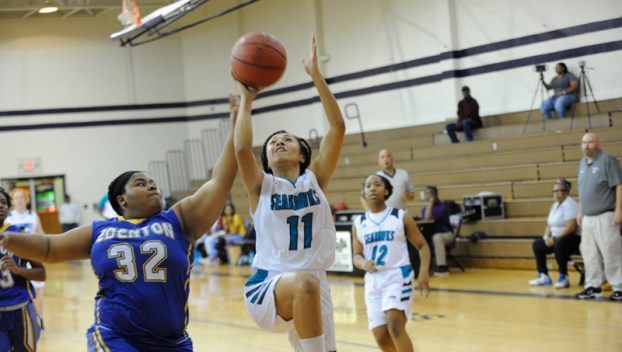 LEADING SCORER: Shantel Cannon goes up for a layup against Edenton earlier this season. Cannon led the Seahawks with 15 points during Friday’s win over Jones Senior. (Sean Finnerty | Daily News)

CHOCOWINITY — Thanks to a stellar defensive effort in the second half, the Southside girls basketball team pulled away from Jones Senior in the latter stages of the game for a 52-29 win on Friday night.

“They controlled the pace early in the game,” Seahawks head coach Milton Ruffin said. We wanted to improve our defense and we were able to get some fast break points. That’s what got us going in the second half. We have to start the game stronger if we want to get where we want to go. Being able to set the tone will help this team win some games.”

Coming into the game still looking for its first victory of the season, Jones Senior (0-9, 0-3 1A Coastal Plains Conference) displayed signs of hope early on against Southside (4-3, 1-1 1A CPC). The Trojans led, 7-5, at the end of the first quarter, but the Seahawks answered. An 8-2 run from Southside early in the second gave the Seahawks a four-point lead. The first half was a low-scoring affair, with Southside holding a 17-14 lead at halftime.

The Seahawks came out hot in the second half, forcing multiple turnovers that led to fast break baskets. A 12-0 run to start the third quarter put the Seahawks firmly in control of the game. Despite trailing by as many as 13, Jones Senior cut the deficit back to single digits. In the end, Southside closed the quarter with a 36-25 lead.

Southside started the fourth on a 10-0 to put the game away. The Seahawks didn’t let up, building a 26-point lead midway through the fourth quarter. Shantel Cannon led Southside with 15 points and Jasmine Blango added 11 and a game-high six steals.

“What changed the game was our press,” Ruffin added. “We got some good looks that didn’t fall in the first half. Applying pressure, forcing turnovers, and getting easy baskets really helped us. It was a much better second half. We sped the game up and ultimately that was the biggest difference in this game.”

Southside will look for its third-consecutive victory when it travels to Riverside today. Tip-off is scheduled for 6 p.m.