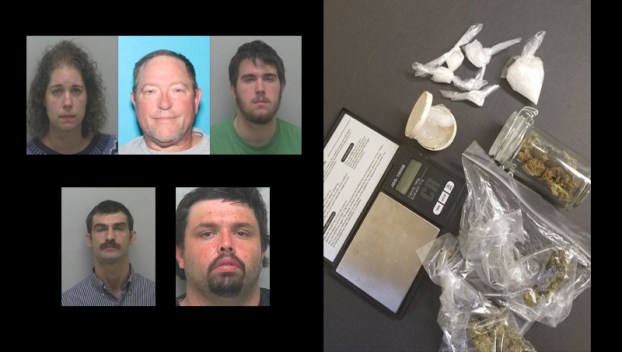 Investigators discovered approximately 18 grams of meth and other drug paraphernalia during a search of a Chocowinity residence on Friday. Five individuals were charged during the search. Top row, left to right, Ava Kelley,Thomas Kelly and Aidan Kelley. Bottom row, left to right, Gary Taylor and Michael Baker.

CHOCOWINITY — Complaints from concerned citizens of methamphetamine use and sale led to the arrest of five people and the seizure of 18 grams of meth from a Chocowinity residence on Friday in a Beaufort County Sheriff’s Office bust.

“Most of the meth was found in a safe in the closet,” BCSO Drug Unit Lt. Russell Davenport said.

According to a release from the BCSO, the agency had established surveillance of the residence at 41 Hudson Farm Road in Chocowinity and performed a stop on a resident that was departing from the home, yielding one bag of meth.

Gary Taylor, 32, of 3247 Chandler Road, and Michael Baker, 35, of 53 Edgewood Drive, was charged with possession with intent to sell and deliver methamphetamine, possession of marijuana, and possession of drug paraphernalia.

The Hackney opens to the public

After two years in the making, The Hackney is taking reservations this week. Housed in a long-derelict former bank, renovated... read more