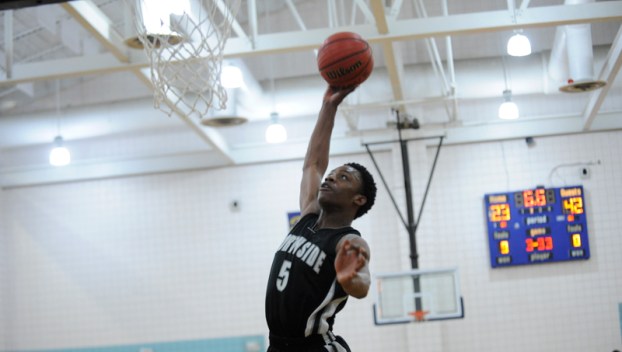 SHOW STOPPER: Johnathan Clark throws down an electrifying alley-oop dunk after Zach Green passed him the ball off the backboard on Friday, sending even the Southside fans into a frenzy. (Sean Finnerty | Daily News)

CHOCOWINITY — Squaring off again after the Panthers defeated the Seahawks by 41 points back in December, Northside once again took down Southside, 78-51, on the road Friday night, but it was a result that left both teams feeling a bit better about themselves.

Northside (7-4, 3-1 1A Coastal Plains Conference) was coming off a disappointing loss to Tarboro that the Panthers let get away in the fourth quarter. But Northside head coach Jared Adams was pleased with how his players responded in the win over their rival on Friday night.

“Tarboro was a tough loss for us but we had to go over some things at practice. And we played good team basketball tonight,” Adams said. “The ball movement was better, we slowed up pace of play and we really focused on finding the open man, making good quality cuts and not being selfish with the basketball and seeing what teammates can do and get everybody involved into the game.”

Led by Rashod Smith, who finished with game-highs of 22 points and 10 assists, the Panthers raced out to a 25-8 lead over Southside (3-8, 0-4 1A CPC) by the end of the first quarter. The Seahawks had a bit more offense in the second thanks to Jalen Kirkman, who hit a corner 3 and completed a three-point play in the opening minutes of the quarter for three of his 15 points. Aeron Wright also came off the bench to spark Southside, scoring six of his 14 points in the second.

But Northside didn’t relent, scoring 19 points in the second quarter to make the score line 44-23 heading into the halftime break. The Panthers, and Johnathan Clark in particular, ended the second period in a flourish, as the senior, who scored 19 points and grabbed eight rebounds, made a couple of plays in the final minute worthy of any highlight reel.

First, Clark threw down a one-handed dunk in transition that brought the crowd to its feet. But that was just a warm-up. In the closing seconds of the half Zach Green came away with a steal, and as Green dribbled toward the Southside basket, he threw the ball off the backboard for Clark, who all in one motion caught the ball in midair, cocked it back and threw down a thunderous dunk that had even the Southside fans going wild.

With the way the first half ended, one couldn’t have been blamed for thinking the game was headed in the same direction as Southside’s 41-point loss to Northside earlier this season. But the Seahawks were determined for that not to be the case.

With Ty Smith relentlessly attacking the basket, scoring six of his team-high 18 points in the third, Southside cut Northside’s lead to 16 points three minutes into the period. The Seahawks never got closer than that, but they made sure Northside never grew its lead to 30 points or more, holding the Panthers to 34 points in the second half, while scoring 28 points themselves.

“Northside was the first big test that we had of the season in the holiday tournament, so I think it was a wakeup call for us,” Southside head coach Sean White said. “They could see the improvement (Friday night). Because there were several times, even in the second half, that we cut it under 20. I think we got it to 16 at one point. And I told them that. I said, ‘You can play with anybody. This proves that you can play with anybody in this conference.’”

Both teams don’t play again until this Friday due to exams, and they will both return with home games. Northside will take on Jones Senior, while Southside will face off with South Creek.

Northside’s dominance on the boards, steals lead to victory over Southside

CHOCOWINITY — Though only having a single-digit lead after both the first and second quarters, the Northside girls basketball team... read more