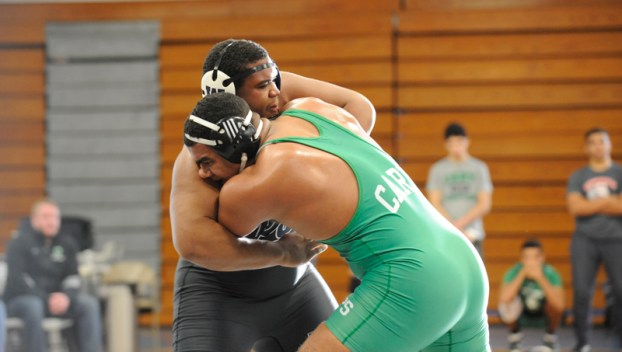 CLASH OF HEAVYWEIGHTS: Khyric McCloud grapples with his opponent from Cary during a dual-team meet the Pam Pack won earlier this season. Unfortunately for Washington, it didn’t have the same success on Saturday at the Jolly Roger invitational, placing fourth out of 29 teams. (Sean Finnerty | Daily News)

Having won the Jolly Roger Invitational in 2017 and placing second last year, the Washington wrestling team had high hopes heading to Corinth Holders for the 2019 edition of the meet last Saturday. But it ended up being a day of disappointment for the Pam Pack, placing fourth out of a field of 29 teams with a score of 141 points, 62.5 points behind winner Cardinal Gibbons.

Washington head coach Chris Penhollow said going into the event, he foresaw nine or 10 of his wrestlers placing in the top four of their respective weight classes. But the Pam Pack had an off day on the mat, with five Washington wrestlers finishing in the top four. Henry Jennings placed second at 145 pounds, Walt Gerard took third at 170 pounds and Brodie Moore placed fourth at 113 pounds. Dylan Modlin (132 pounds) and Khyric McCloud (285 pounds) both tied in their respective third-place matches with double forfeits and split the points with their opponents, due to a state rule that no wrestler can compete in more than five matches in a single day.

Washington might’ve scored more points, if not for some close losses in key matches and the loss of Christian Whitney to injury, who hurt his wrist during his first match.

“Had a couple that were right there, lost really close semifinal matches, actually had three lose really close semifinal matches. Brodie, Gavin (Woolard) and Tristen Nixon all had really tight matches in the semis. And then Brodie battled back to get fourth, and then Tristen and Gavin lost in the match that would’ve put them in the consolation finals,” Penhollow said. “But, you know, it’s all part of the experience. A little bit of a frustrating day, but we battled through it. We finished fourth, so it wasn’t terrible.”

Washington is already working to put Saturday’s performance in the rear-view mirror, but not before some self-reflection. Penhollow said he sat down with his starters on Monday and went through everybody’s matches from Saturday and went over other things he felt they needed to hear.

“We had a long talk yesterday (Monday) at the start of practice, made sure everybody is in a good state of mind, talked about some things that we need to do to get a little more competitive. I explained to them, east of (Interstate) 95, we’re a really strong team. But as you shift further to the west in this state, the wrestling gets better. Typically, your teams from the west win the dual state championships and have more individual champions each year because they wrestle better competition,” Penhollow said. “We just got to work a little harder in the room and can’t be satisfied by beating up teams around here locally because that’s not going to help us when we get to the postseason.”

According to Penhollow, his team’s response was immediate, as they were very receptive to what was said in the meeting and followed the group sit-down with a strong practice session.

Looking ahead, Washington will have its final home meet of the season this Friday, as the Pam Pack will take on conference foes West Craven, South Lenoir and Greene Central for Senior Night. A ceremony for the seniors will be held at 5 p.m., before the action on the mats.

Washington will then get right back to it on Saturday, as the Pam Pack will travel to Fuquay-Varina in the morning for the DASH Classic, Washington’s final non-conference meet of the regular season. The postseason begins with the conference tournament on Jan. 26, followed by the dual-team playoffs on Jan. 29, and the 2A Eastern Regional Championships and State Championships the first two weeks of February.

Events like the DASH Classic and the Jolly Roger Invitational are important for Washington because they offer stiffer competition for the Pam Pack, compared to conference opponents. So far this season, Washington is 5-0 against fellow 2A Eastern Carolina Conference members, winning every dual match by an average of 36.8 points.

“So this weekend’s tournament is good to get that last little bit of tough stuff in. And then that’s really it before the dual-team playoffs,” Penhollow said.

WASHINGTON — After a sluggish start on Wednesday, Washington found its rhythm in the third quarter, exploding for 28 points... read more