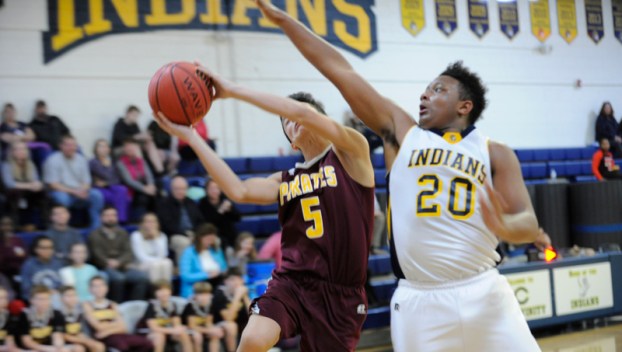 Chocowinity finishes strong for win after holding off Bath rally

CHOCOWINITY — Falling behind to Chocowinity, 25-8, with less than three minutes remaining in the opening half, the Bath Pirates looked dead in the water. Bath managed to rally back to come within five points near the end of the third, but the Indians weren’t fazed, closing the game out in the fourth quarter for a 61-40 win at home.

After the game, Bath head coach Wayne Randall said he was proud of his team for its response to falling behind by double-digits to a team the Pirates already lost to by 37 points earlier this season, crediting his team’s mindset for rallying back from its early hole.

“They (the Pirates) played strong. Turnovers were a factor, and that created that deficit for a while. But they hung strong; they hung better than I thought that they would against this team. And I’m proud of their effort tonight,” Randall said. “That’s on their mentality, working hard. I told them all week long, ‘Hey, work hard. We can hang against this team; we can hang against any team in the league. Just work hard.’ Work their tails off and it will work itself out.”

Through Elyjaih Baldwin, who finished with a game-high 20 points, Chocowinity established its dominance in the post early, as Baldwin scored six points in the opening quarter. Leading 14-8 heading to the second quarter, the Indians took control of the game in the second period.

Cranking up the defensive pressure, Chocowinity pinned Bath inside its end of the court and came away with several steals that were turned into layups. Thanks to Baldwin, Xavier Ham, Vonte Deloach and Tequon Moore, the Indians pushed its lead to 25-8 with 2:36 left in the first half.

Not going down without a fight, the Pirates responded with a 10-4 run to close out the second quarter. Using the same formula as Chocowinity, Bath’s run was fueled by steals converted to layups on the other end. Eli Huynh scored four of his 12 points in the run and Carson Clinkscales hit a 3-pointer in the final seconds of the half to cut the Indians’ lead to 28-18 at the break.

The Pirates carried their momentum into the third, coming within six points after Brice Evans converted a three-point play after getting fouled while making a basket. Clinkscales, who finished with 12 points, buried another shot from behind the arc to make the score 33-28 with 2:39 left in the third period.

But that was as close as the Pirates got, as Chocowinity’s Josh Armstrong answered with a 3-pointer of his own, and Chocowinity took a 40-32 lead into the fourth quarter. The Indians once again increased their defensive pressure in the final quarter, limiting Bath to eight points in the fourth, while converting turnovers into points.

Despite the double-digit victory, Chocowinity head coach Alan Swain said the game felt much tighter, due to Bath’s persistence.

“Bath played a heck of a game though, they gave us a run for our money,” Swain said. “Like I said, it didn’t feel like a 21-point win. But we got the win; a win’s a win at this point. We’ve got to pretty much win out from here on out.”

Chocowinity will next host St. Peter Catholic School’s green squad on Wednesday, tipping off after the girls play. Bath returns to action on Wednesday too, traveling to Greenville to take on St. Peter’s blue squad.

Chocowinity girls pull away in second half to defeat Bath

CHOCOWINITY — It was the battle of players wearing No. 3 leading their respective teams Wednesday, as Bath’s Hannah Baker... read more