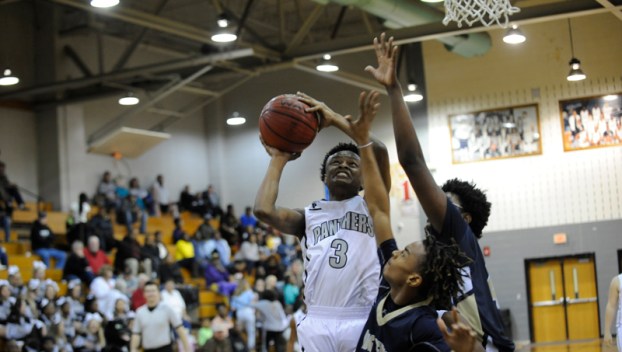 CLIMBING THE CHARTS: Rashod Smith hangs in the air to get a shot off while two Trojans contest during Northside’s win on Friday. Smith, a junior, scored 40 points to surpass 1,000 points for his career and now stands at No. 8 on Northside’s career-points list among girls and boys. (Sean Finnerty | Daily News)

PINETOWN — Playing in front of a home crowd hoping to witness a milestone event Friday night, the Northside boys basketball team came away with a 94-71 win over Jones Senior, but the highlight of the night was when Panthers star point guard Rashod Smith surpassed 1,000 points for his career midway through his junior year.

Smith, who came into the game 13 points shy of the 1,000-point mark, wasted little time on Friday in his pursuit of the career milestone. The diminutive guard, who’s averaging 28.4 points per game this season, scored 12 points in the first quarter to help give Northside (8-4, 4-1 1A Coastal Plains Conference) an 18-12 lead over Jones Senior (3-11, 2-4 1A CPC) after a quarter of play.

Knowing he was so close to 1,000 points, Smith then seemed to force the issue and missed several tough shots over a four-minute span. Then with 6:05 left in the second, Smith finally got the basket he and the Northside faithful were looking for. For a player who has scored so much, whether by finishing with an acrobatic layup or draining a 3-pointer, the basket that gave Smith his 1,000 and 1,001 points was rather ordinary: a put-back after grabbing an offensive rebound.

After the game, Smith said he wanted to accomplish the feat early on so he could just focus on the game and hoped his 1,000th point came courtesy of an exciting play, but was content with reaching the milestone regardless of how the basket came.

With the weight of trying to reach 1,000 points lifted off of his shoulders, Smith proceeded to light up the Trojans, finishing with 40 points, three assists, five rebounds and six steals. Smith ended the night with 1,027 points for his career, placing him eighth all-time for Northside, among boys and girls. With 11 games still to go this season, Smith will most likely end up surpassing Derrick Leathers’ 1,125 points for third on the list. That would place Smith behind only Michelle Leathers (2,008) and Bam Adebayo (1,894), heading into his final season.

But as Smith cemented his place as one of the best scorers Northside has seen, Jones Senior heated up from beyond the arc, hitting five 3-pointers in the second. When halftime came along, the Panthers led 44-38.

Northside head coach Jared Adams used the break to iron out some defensive details with his players.

“At halftime, we just had a talk on not trying to run out and trap in areas where we’re not going to trap (successfully) and closing out (shooters) better,” Adams said. “Closing out with control so we don’t run by the offensive player and then they get an open shot. And we did that, so then therefore their shots were a little off, we were able to get rebounds, push it up the floor and run a good offensive play.”

The Panthers took their coach’s words to heart, as they went on to hold Jones Senior to just nine points in the third quarter, while scoring 28 points themselves to take a commanding 72-47 lead into the final quarter. Northside coasted in the fourth quarter to come away with the 23-point victory, with Adams saying it was one of his team’s better defensive performances of the season.

While Smith was the focus of the night, Northside isn’t a one-man team. Jonathan Clark continued to affect the game in a myriad of ways, scoring 16 points, dishing out nine assists, grabbing six rebounds and coming away with eight steals. Zach Green chipped in with 13 points and eight rebounds, while Kenneth Winfield contributed 11 points.

The Panthers head to Plymouth today to take on Washington County, which beat Northside in the final game of the Northside Christmas Tournament earlier this season.

Washington dropped by Vikings KINSTON — Riding a three-game win streak and fresh off of its first conference win in... read more