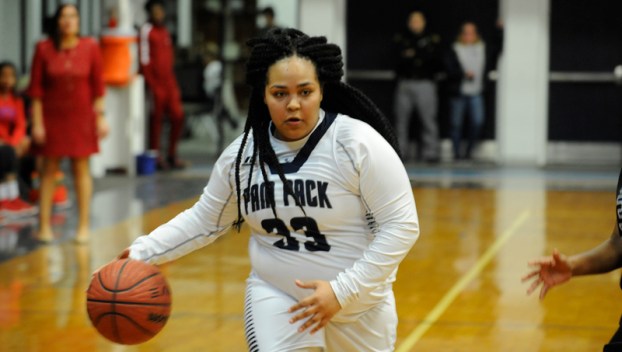 THREAT FROM DISTANCE: Dayna Blount led the Pam Pack with 13 points during Washington's win over West Craven on Tuesday, knocking down three 3-pointers in the process. (Sean Finnerty | Daily News)

WASHINGTON — Fresh off of a 26-point loss to conference leader Kinston on Friday that snapped the Lady Pam Pack’s four-game win streak, Washington rebounded nicely with a convincing 52-24 win at home over West Craven Tuesday night.

“We needed to get that victory,” Washington head coach Ralph Biggs said. “It was very important for us because we’re going back on the road, and we’ve been playing well at home. So it was good for us to come home after a tough loss in Kinston and regroup and get a win, so the girls can go to Greene Central with a good attitude.”

Washington (7-7, 3-3 2A Eastern Carolina Conference) quickly took control of the game, building a 15-2 lead over West Craven (7-9, 3-4 2A ECC) by the end of the first quarter. The Pam Pack’s early surge was led by Daria Jones, who scored six of her eight points in the opening period.

But while Jones started off hot, it wasn’t she or Washington’s other prominent post players — Briasia Somerville and Reagan Ruther — who led the Pam Pack in scoring on the night. That distinction fell to Dayna Blount, who hit three 3-pointers on the way to finishing with a game-high 13 points.

Blount’s ability to make shots from distance went a long way in helping Washington pick up the win and will create better opportunities for her teammates moving forward, according to Biggs said.

“That was the key — she opened things up for us — because we hadn’t been shooting the ball well from the outside,” Biggs said. “And Dayna was due a good shooting game because she’s a good shooter. And we just kept telling her to shoot it and today (Tuesday) it came together for us. It was good for us; it opened everything up. It gave Daria more space, Bri(asia) more space and Reagan more space. Now our next team is going to have to account for Dayna, which is going to open the court up for us.”

After maintaining its 13-point lead by heading into halftime with a 25-12 lead, Washington continued to turn the screws on the Eagles in the second half. Even with Jones sitting out the entire third quarter due to foul trouble, the Pam Pack built a 40-18 lead by the end of the third, thanks in part to scoring provided by Blount, along with Somerville and Kizoria Redmond, who both scored six points on the night.

Washington returns to action tomorrow when it travels to take on Greene Central.

Washington dropped by Vikings KINSTON — Riding a three-game win streak and fresh off of its first conference win in... read more