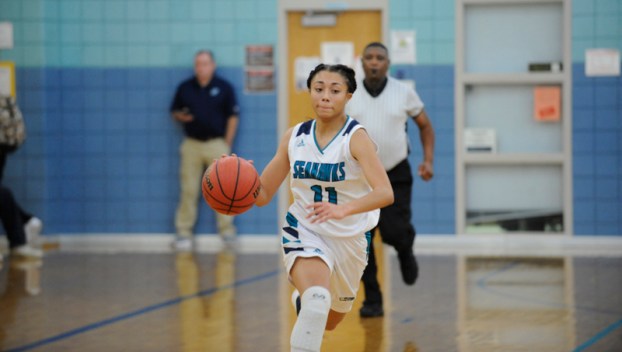 COLUMBIA — Playing its second away game in as many days, and third match on the road in four days, the Southside girls basketball team got off to slow start against Columbia Thursday night but eventually found its rhythm to come away with a 48-34 victory.

Southside (7-6, 2-4 1A Coastal Plains Conference) started sluggishly against a Columbia (1-10, 1-3 1A Atlantic 5 Conference) squad the Seahawks defeated by 46 points at home in December and led 8-7 by the end of the opening quarter. Southside head coach Milton Ruffin said playing on back-to-back nights had an effect on his players, but a defensive switch helped energize them.

“Playing back to back is always hard. Especially when you have to go on the road, playing back to back is kind of tough. But once we got settled in we were able to get some rhythm,” Ruffin said. “It was actually our defense, getting our legs back under them. They were kind of tired, but once they got their legs back under them, they started to pick up a little rhythm there and we played a little pressure defense that got the girls moving. I thought that was the key, just playing them man to man and started to move them around a little bit rather than just sitting back in the zone.”

Ruffin said he was very happy with the rebounding provided by Sarah Petty, Delaney Ayers and Shantel Cannon, who finished with 13, 12 and 10 boards, respectively. The trio’s efficient work on the glass allowed Southside to quickly get in transition and score on the other end.

Cannon led all players with 18 points and seven steals, while Laquisha Woolard scored nine points and Jasmine Blango chipped in with seven points and five steals.

COLUMBIA — Facing a Columbia team it already defeated this season, the Southside boys basketball team looked ready to snap its losing streak Thursday night. But a poor shooting performance from the Seahawks ruined those plans as they fell, 74-62, to the Wildcats.

“We just weren’t hitting our shots; our shots weren’t dropping,” Southside head coach Sean White said. “We just didn’t play well at all. Defensively, we were playing pretty good in our press and all, but on the offensive end, we just couldn’t get anything going. And it seemed like it was like that the whole game.”

While the Seahawks (7-6, 2-4 1A Coastal Plains Conference) struggled from the field, Columbia (3-9, 2-5 1A Atlantic 5 Conference) received a boost from the play of Jamon Spencer, who didn’t play in the teams’ first matchup this season, a 62-26 Southside win on Dec. 12. Spencer finished with 24 points and 17 rebounds on 7-of-14 shooting from the field.

Thanks in part to the play of Jalen Kirkman, who scored 20 points, and Ty Smith, who had 18, the Seahawks only trailed by six heading into the final quarter. But Columbia pulled away late and killed the game off at the free-throw line, hitting 16 free throws in the fourth.

Aeron Wright chipped in with 10 points for Southside, including eight in the third quarter, while Kevin White scored eight points.

Southside basketball returns to the court Tuesday when it welcomes Tarboro. The Lady Seahawks are scheduled to tip off at 6:30 p.m. and will be followed by the boys.