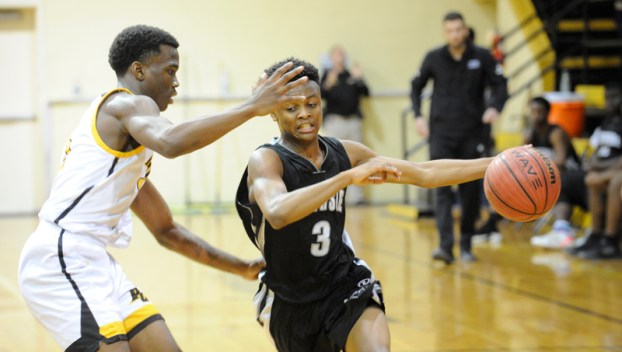 TOUGH NIGHT IN BAYBORO: Rashod Smith makes his way past a Pamlico County defender during Northside’s loss to the Hurricanes Friday Night. The Panthers struggled shooting the ball all game, but Smith still managed to reach 32 points to lead all scorers. (Sean Finnerty | Daily News)

BAYBORO — The Northside boys basketball team traveled to Bayboro Friday night to take on Pamlico County in what looked set to be a fierce battle between two of the top squads in the 1A Coastal Plains Conference. But the Panthers could never quite get going on offense as they struggled shooting the ball all night in an 89-60 loss to the Hurricanes.

Northside (9-5, 4-2 1A CPC) and Pamlico County (6-5, 5-1 1A CPC) both entered the night atop the league standings, along with Riverside, with just one conference loss each. Unfortunately for the Panthers, they’re now tied for third with Tarboro after making 21 of their 69 shots (30 percent) from the field against Pamlico County.

Even with the drop in standings, Northside head coach Jared Adams was pleased with how his players kept battling and was already looking forward to his team’s next big game.

“We didn’t shoot the ball well from the outside, got kind of frustrated, we thought we missed some calls, we got beat up a little inside,” Adams said. “But as a whole, we didn’t quit, we kept fighting and we’re going to work on some things Monday for when we play Riverside on Tuesday (today).”

Northside struggled shooting the ball from all areas Friday. The Panthers hit only six of their 28 shots attempted from behind the arc and also made just 12 of 27 free-throw attempts.

While Northside had difficulty putting the ball in the basket, one Panther, Rashod Smith, still managed to lead the game in scoring with 32 points. The Hurricanes made Smith work extremely hard to get open, often shadowing the Northside guard with a defender while the rest of Pamlico’s defenders were in a zone defense. The only other Panthers in double-figures were Johnathan Clark and Zach Green, who scored 12 and 11 points, respectively.

Pamlico County jumped on Northside early Friday night, building a 23-10 lead by the end of the first quarter. Thanks in part to Clark, who scored nine points in the second quarter, the Panthers cut their deficit to single digits in the second. A Smith layup on a fast break brought Northside within six points with 3:15 left in the opening half. But Pamlico closed the second quarter on an 11-1 run to give itself some breathing room, and the Hurricane faithful was rocking and letting the Panthers hear it when the teams went to the locker rooms for halftime with the score at 44-28.

Things only got worse for Northside when play resumed. The Panthers opened the third ice cold and didn’t make a basket until the 4:24 mark, when Green hit a 3-pointer. Pamlico County’s lead gradually got bigger and bigger as five Hurricanes hit double-figures in points to share the scoring load, led by George Jones’ 25 points. Northside kept firing away in hopes of getting itself back in the game, but it wasn’t the Panthers’ night.

Adams said his team will work on how to deal with adverse situations, whether a poor night shooting or pest-like defending.

“When you’re not shooting well it seems like the rim gets smaller, and then we force more shots, when in reality you can’t do that,” Adams said. “It’s just kind of sneaky, little holding (of) the jerseys, couldn’t come off of picks like we wanted to; just kind of took us out of our game. But we’ve just got to work on keeping level heads, sticking to the game plan and not getting frustrated in crunch situations.”

Northside will look to rebound immediately when it travels to Riverside tonight to take on the Knights, who the Panthers beat at home 86-79, in December.