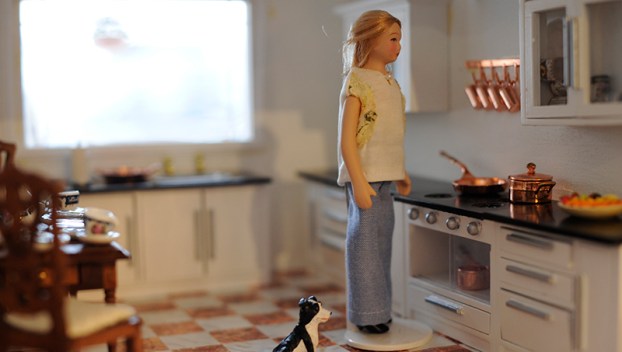 IN THE DETAILS: A tiled floor, copper pans, blue and white English china and a black and white dog can be found in this cozy kitchen. A trip inside Stewart’s Jewelry Store in downtown Washington will reveal the inside of this tiny home built by Washington artist Jane McCotter. (Vail Stewart Rumley/Daily News)

Not every artist can say they built a house from the ground up, but Jane McCotter can. In fact, she’s built two.

McCotter’s most recent housebuilding effort is on display in the window of Stewart’s Jewelry Store in downtown Washington. A two-story Colonial with a wide front porch, it’s perfect for a family of four very small people. The dollhouse is handmade from its foundation to each tiny shingle individually glued to the roof.

“It’s like building a house — foundation, flooring, walls, windows, doors, staircase. All the windows are put together by hand,” McCotter said. “None of that stuff is done. It comes in a flat box.”

McCotter’s first foray into dollhouse building was 15 years ago. She enjoyed the process so much, she purchased another kit, but her watercolor painting took over. The second dollhouse sat uncompleted until she pulled it out again last summer. 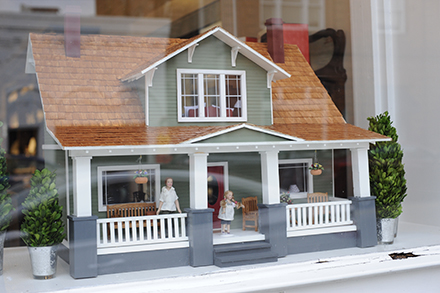 DOWNSIZING: The dollhouse currently on display in the window of Stewart’s Jewelry Store in downtown Washington comes fully furnished, including the family of four.

“It is a lot of intricate work, but it’s fun. It’s a lot of details, which I love — a lot of holding your mouth just right,” she laughed.

The details can be seen in blue and white china on the kitchen table, painted banisters, an Oriental carpet running the length of the steps, furniture, bedding, even towels folded onto bathroom shelves.

The design element was what drew her back to the project abandoned 15 years ago.

“You know, it’s just like building a house. The fun part is the decorating and doing,” McCotter said.

She said the process is not unlike her painting projects.

“They’re both sort of creative. Obviously, this is a longer task; painting is a quicker turnaround,” McCotter said. “It’s still about color. When you’ve built the house, you have this shell — where do you go with it? So, in a way, it is like painting.”

McCotter had a dual purpose in putting the dollhouse in the window at Stewart’s: to bring people into the store to see inside the miniature house and to, perhaps, sell it.

“It really is sturdy. You literally can play with it; it’s not just for looks,” McCotter said.

As to whether she’ll embark on a third dollhouse in the future, that depends, she said.

“You know, if I could sell the one down at Stewart’s, I probably would. Because you get kind of obsessed with it. … But if nobody buys it, I’ll bring it back here and play with it myself,” she laughed. 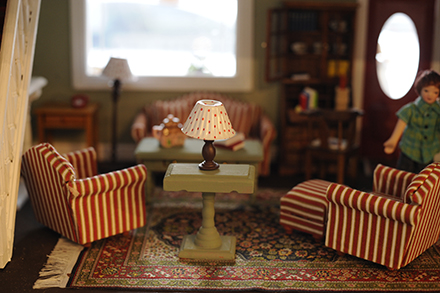 For five years, the Blind Center of North Carolina’s major fundraiser featured patrons Dining in the Dark. This year, the... read more