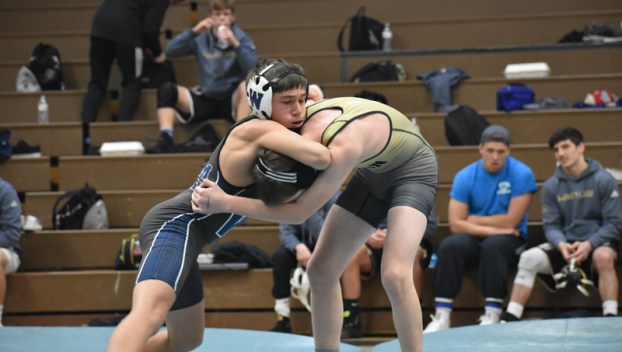 IN CONTROL: Isaac Campbell locks up his Croatan opponent in the third round of the dual-team state playoffs Thursday night. (Melissa Moore)

Pam Pack wrestling knocked out of playoffs by slimmest of margins

TRINITY — It was the matchup Washington wanted ever since getting knocked out in the second round of the dual-team state playoffs by Croatan last year. This season, the Pam Pack was given a chance at sweet revenge in a third-round meeting. Winning four of the first six matches, Washington looked to be in control, but slipped late to fall to Croatan, 33-31, Thursday night at Trinity High School.

“We absolutely gave away what should have been our trip to Greensboro (for the state championship),” Washington head coach Chris Penhollow said. “We had led for the entire match; we had about five or six matches that were just right there. We didn’t finish at the end.”

The Cougars actually took the first match by decision to take a 3-0 lead, but a pin by Isaac Campbell and a victory via a 5-2 decision by Brodie Moore made the score 9-3 in the Pam Pack’s favor. Croatan picked up a 5-4 decision, but a Croatan forfeit at 126 pounds, followed by a 19-8 major decision win by Dylan Modlin, put Washington up, 19-6.

Croatan answered with a decision win, but Washington’s Henry Jennings, who’s been competing through an injury after separating his shoulder two weeks ago at the DASH Classic, pinned his opponent. That made the score 25-9, in favor of the Pam Pack.

But it was at this point the wheels started to come off for Washington. Croatan picked up 18 consecutive points, from a forfeit and two pins, to take a 27-25 lead. Christian Whitney, who recently returned from a wrist injury, pinned his opponent in the 182-pound division to put Washington back up, 31-27. But Croatan won two close decisions to close out the match and end the Pam Pack’s run in the dual-team playoffs.

While Washington’s dual-team season is over, Washington’s wrestlers still have a chance to attain individual glory.

“The fortunate thing is they get to rebound for a week, and we start the individual regionals next week at Croatan,” Penhollow said.

After taking the weekend off, the Pam Pack will reconvene for practice Monday through Thursday, then head to Croatan for the 2A Eastern Regional Championships next Friday and Saturday. The top-four finishers in every weight class will qualify for the individual state championships in Greensboro on Feb. 14-16. The most individuals Washington has qualified for the state championships is seven, according to Penhollow, but he aims for even more this time around.

“I’m hoping for double-digits this year with this group I’ve got,” Penhollow said.