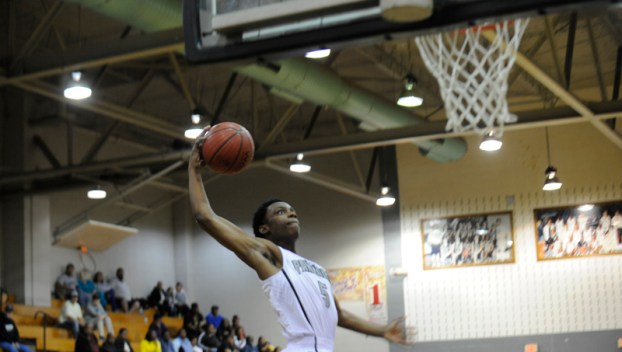 RIM-ROCKER: Johnathan Clark cocks back to throw down a monstrous dunk earlier this season. Clark had a similar rim-rocking dunk Thursday night against Pamlico County, but the senior’s 33 points weren’t enough to defeat the Hurricanes. (Sean Finnerty | Daily News)

PINETOWN — In a matchup where both teams put on an offensive clinic with a score line that was close to the very end, the Northside boys basketball team ultimately lost its third-straight game, falling at home Thursday night to Pamlico County, 93-85.

“Tonight we shot the ball better and moved the ball on offense and didn’t play selfish,” Northside head coach Jared Adams said. “Defensively, we didn’t quite get back in time in transition late in the fourth quarter. But when you score 85 points and you lose, that’s nothing to hold your head down about,”

The Panthers (9-7, 4-4 1A Coastal Plains Conference) came into Thursday’s game looking for revenge after losing to the Hurricanes (8-5, 7-1 1A CPC) on the road, 89-60, just six days prior. Northside got off to the hot start it was looking for, thanks to three consecutive 3-pointers by senior guard Johnathan Clark in the first quarter to jump out to a 16-11 lead.

But the Hurricanes battled back and responded with a 16-3 run that stretched into the second quarter, taking a 27-19 lead in the process. Junior Northside guard Rashod Smith brought Northside within striking distance with a couple of 3-pointers of his own in the period to make it a 45-39 game in Pamlico County’s favor at halftime.

Pamlico amped up the defensive intensity in the second half to spark its offense by controlling the glass and getting out in transition. George Jones poured in nine points in quarter, all coming inside the paint, while Lamont Murray added seven points in the period, including a made 3-pointer to help Pamlico take its first double-digit lead of the game.

“Pamlico is a very athletic and disciplined team and they have a lot of length,” Adams said. “They really crash the boards and they utilized their length and their height. So when Pamlico gets that rebound, they push it back up the floor to answer. They don’t hesitate to score offensively.”

The Panthers though, wouldn’t go down without a fight. Clark single handedly recaptured momentum for Northside by coming down the lane off a turnover in transition and rocking the rim with a thunderous one-handed slam dunk to close out the third quarter.

The Panthers would make it a one-possession game early in the fourth. But Northside got into foul trouble down the stretch, sending Pamlico to the free-throw line 12 times in the quarter, where the Hurricanes converted on 10 of them. The Panthers on the other hand, went to the charity stripe just twice in the period.

“We played a great basketball game for three and a half quarters but down the stretch we couldn’t quite get it together,” Adams said. “And when your trying to playing defense with 4 fouls you can’t really play defense like you want to. But as a whole, I’m proud of my guys for playing the way they did after losing the way we lost to Pamlico last week.”