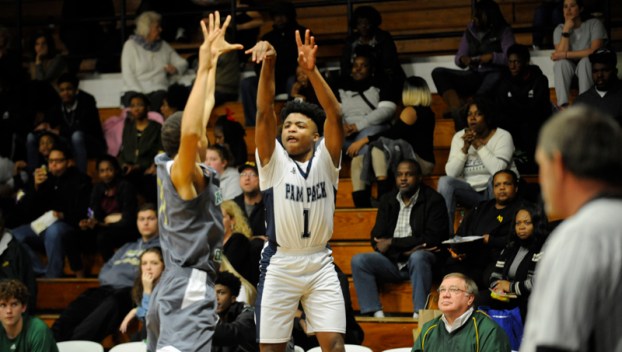 SHARPSHOOTER: Omarion Blount drains a 3-pointer early on in Friday’s game as an Ayden-Grifton defender tries to close him down. (Sean Finnerty | Daily News)

WASHINGTON — The Washington boys basketball team looked set to pick up a conference win Friday night after Omarion Blount drained a 3-pointer with 15 seconds left. But Ayden-Grifton grabbed a rebound from a Pam Pack-missed free throw and raced upcourt in seven seconds to score as the final buzzer sounded, handing Washington a heartbreaking 83-82 loss in front of a stunned home crowd.

The final minutes of the game were exhilarating, as Washington (5-12, 1-8 2A Eastern Carolina Conference) allowed Ayden-Grifton (8-11, 4-4 2A ECC) to rally back from nine points down with 2:10 remaining. The Chargers took an 81-79 lead with 0:26 left, thanks to some sloppy play that gifted Ayden-Grifton with a layup.

Not flinching, the Pam Pack answered back through Blount’s 3-pointer, his sixth of the game, to take an 82-81 lead. The Chargers missed on their next possession and fouled when Washington grabbed the rebound with seven seconds remaining. Unfortunately for the Pam Pack, the first free throw of a one-and-one was missed, and the Chargers raced upcourt to score and dash Washington’s hopes for victory.

Blount led the Pam Pack with 27 points, while Justin Powell scored 15, including eight in the final quarter. Kash Godley and Jeremee Bryant both had 10, Jordi Barnes and Terry Moore each chipped in with six points, and Jamauri Bryant and Treshon Pope both contributed four points.

Washington will look to bounce back tomorrow when it travels to South Lenoir.

WASHINGTON — The Washington girls basketball team solidified its spot at third in the conference with a 51-28 victory over Ayden-Grifton Friday night at home.

Washington (9-8, 5-4 2A Eastern Carolina Conference) relied on the trio of Daria Jones, Briasia Somerville and Reagan Ruther to dominate Ayden-Grifton (6-11, 3-5 2A ECC). The trio used their size and length to control the paint on the defensive end, as well as on the offensive end, often grabbing two or three offensive rebounds per possession. Jones, who scored a game-high 14 points, also displayed her range, hitting a pair of 3-pointers as well.

The Pam Pack set the tone early, building a 13-3 lead by the end of the first quarter, before taking a 20-10 lead into halftime. Washington scored 19 points in the third to lead, 39-16, heading into the final quarter.

Washington travels to South Lenoir tomorrow to take on the Blue Devils at 6 p.m.

Lady Panthers back to winning ways

PINETOWN — Having struggled recently with putting the ball in the basket, Northside rediscovered its scoring touch in a 68-29 win over Terra Ceia Friday night, snapping its three-game losing streak in the process.

Setting the tone early with a man-to-man defense, Northside (6-7, 3-5 1A Coastal Plains Conference) jumped out to a 17-7 lead over Terra Ceia (5-13, 3-9 1A NCISSA Tarheel Conference). Carly James did her best to keep the Knights close, hitting three shots from behind the arc to finish with 17 points, but it wasn’t enough.

The Panthers held Terra Ceia to single-digit outputs every quarter, while Northside poured in the points, scoring 16 in the second period and 27 more in the third. A basket by Gabby Slade early in the fourth gave the Panthers a 40-point lead and triggered a running clock. 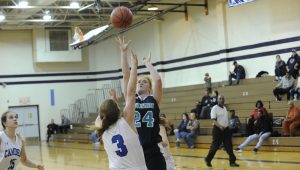 WORKING HARD IN THE PAINT: Southside’s Delaney Ayers puts up a shot against Camden County earlier this season. Ayers grabbed six rebounds as the Seahawks held Pamlico County to 40 points Friday night, but Southside didn’t have the offensive firepower to pull off the victory. (Sean Finnerty | Daily News)

Southside (7-9, 2-6 1A Coastal Plains Conference) held Pamlico County (16-2, 9-0 1A CPC) to well under its season average of 59.5 points per game, but unfortunately for the Seahawks, the Hurricanes were even more effective on defense.

Pamlico County pestered Southside into 27 turnovers on the night, while the Seahawks could never get running in transition, due to recording only eight steals in the game. Southside managed to limit the Hurricanes to only 17 made field goals on 70 attempts, but made only eight baskets on 36 shots itself.

The Seahawks next head to Jones Senior today to take on the Trojans at 6 p.m.

CHOCOWINITY — Lacking the firepower to keep up with high-scoring Pamlico County, Southside fell at home to the Hurricanes, 77-50, Friday night.

Pamlico County (9-5, 8-1 1A Coastal Plains Conference) came out firing on all cylinders Friday night, scoring 25 points in the opening period to establish a 14-point lead over Southside (4-14, 0-8 1A CPC).

The Seahawks increased their scoring output every quarter, but couldn’t make a dent in the Hurricanes’ lead, as the conference leaders put more and more distance between themselves and the Seahawks every quarter. Pamlico County took a 42-25 lead into halftime, before increasing it to 61-37 heading into the final period.

Pam Pack wrestling knocked out of playoffs by slimmest of margins

TRINITY — It was the matchup Washington wanted ever since getting knocked out in the second round of the dual-team... read more