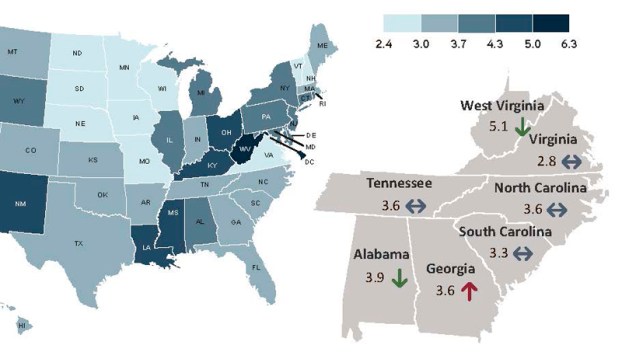 Beaufort County’s unemployment rate increased in December 2018 to 4.7 percent, up from 4.4 percent in November 2018, according to information compiled by the Labor & Economics Analysis Division of the N.C. Department of Commerce.

All 15 of the state’s metropolitan areas reported increases from November through December.

For December, Beaufort County’s jobless rate was ranked 75th in the state. The month before it was ranked 68th.

“I know there has been some talk about jobs in Beaufort County. Of course, we had Parker Hannifan that closed down at the end of the year. … That affected quite a few people. We’re seeing a lot of those people come through our center right now,” said Wesley Watson, director of the NC Works office in Washington. “We’re doing a good job at, I guess you can say, transitioning that workforce to other employers. IDX has done some hiring, brought on quite a few people. The new business in Beaufort County, IMT, has done quite a bit of hiring. … That’s been the big one in our county.”

Hyde County’s jobless rate increased by 3 percent, from 5.6 percent in November to 8.6 percent in December. In December 2017, its unemployment rate was at 10.3 percent.

From November through December, Martin County’s unemployment rate increased from 4.4 percent to 4.9 percent. In December 2017, its jobless rate was at 5.6 percent.

Washington County’s unemployment rate increased from 5.5 percent in November to 6 percent in December. In December 2017, the county’s jobless rate was at 7.1 percent.

Of the state’s 15 metropolitan statistical areas, six of the MSAs east of Interstate 95 and the Fayetteville MSA had the highest unemployment rates in December, all above or at the state rate of 3.8 percent, according to LEAD. East of I-95, The Rocky Mount MSA was the highest at 4.8 percent for December.

The unemployment figures released by the state’s Commerce Department do not include unemployed people whose unemployment insurance benefits expired and who are not listed as unemployed. Factor in those people and a county’s true jobless rate is higher.

We’ve all been there. Possibly from spilling some piping hot coffee or grabbing a hot pan, we’ve all suffered pain... read more