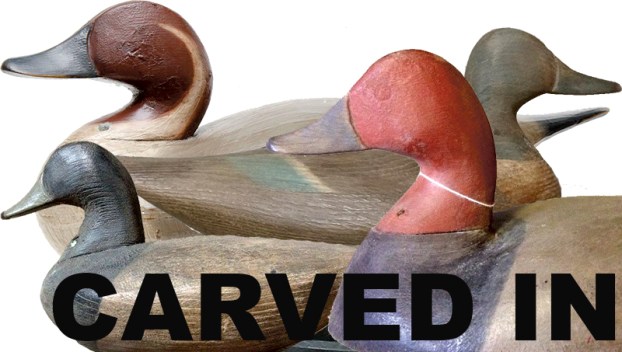 DECOY BY DESIGN: Jerry Talton, representing Core Sound Decoy Carvers Guild, will give a live demonstration of how to carve a decoy, from wood block to finished decoy at the Washington Civic Center on Saturday. The event is part of the three-day East Carolina Wildlife Arts Festival. Pictured (left to right) are Talton’s carvings: a Core Sound drake blackhead, a pintail, a Core Sound/Currituck blue wing teal and a Core Sound redhead wing duck. (Jerry Talton)

He works with hatchets, spokeshaves and knives. Jerry Talton is an artist.

For about 16 years, Talton has been carving the likes of Barnegat Bay blackhead hens, blue wing teals, buffleheads and more waterfowl the uninitiated would simply refer to as ducks. In the process, he’s earned numerous awards for his carvings, recently taking top prize at the Ducks Unlimited North Carolina Decoy Carving Championship and being named featured carver at the Core Sound Decoy Festival — a high honor.

Saturday, Talton, representing the Core Sound Decoy Carvers Guild, will bring his talents to the Washington Civic Center to show people how he transforms a block of wood into a work of art.

“I will be making decoys in a traditional manner: chopping with a hatchet, smoothing them with a spokeshave, carving their heads with knives. These are real decoys; they’re not made to ride a shelf. They’re working decoys,” Talton said.

His specialty is traditional decoys, with his own touch: he hollows them out and paints them with artist’s oil paints. He doesn’t use filler: everywhere he uses glue, he also uses nails. These decoys are meant to last.

“I want my decoys to last way longer than I do, and I want people’s grandchildren to sue each other over them,” Talton joked.

It’s clear Talton has a passion for carving, and doing it the right way, but it’s also a passion he stumbled upon quite by accident. One fateful Christmas, Talton was walking around a show in search of the perfect gift for his decoy-collecting brother and had such a good time, he decided to try his hand at carving one of his own.

“I’ve always been interested in history, and I had no idea the rich history of waterfowl in our area, and I’ve just been obsessed with it ever since,” Talton said. “I had a lot of teachers. I mean, I would say I just bought a block of wood and carved it, but I had been shaping surfboards for years.”

Talton found mentors in the Core Sound Decoy Carvers Guild and while he was honing his craft, he also picked up another — related — hobby.

“I actually starting hunting after I starting carving decoys. All my brothers hunted and fished when we were growing up, but I was just never really interested in it,” Talton said.

But that has changed, as has the number of hours he dedicates to carving his decoys. He said it can take anywhere from three or four hours to several weeks to complete a carving — timing depends on how complicated the project is. Whether a simple decoy or one that��s anatomically accurate, they’re all meant to be used.

“Life is too short to hunt over plastic decoys,” Talton said. “There’s already enough plastic in the ocean and waterways.”

For the past 20 years, Greg Purser and Everett Duncan have built a business on adding unique touches to people’s... read more