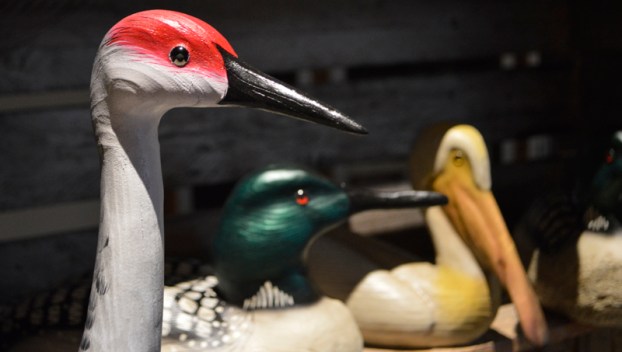 A LONG MIGRATION: Wooden carvings from an artist in Delaware made the long migration to the Washington Civic Center for the East Carolina Wildlife Arts Festival. (Matt Debnam/Daily News)

If one didn’t know any better, it would be easy to mistake the entries in the 2019 North Carolina Waterfowl Conservation Stamp competition as photographs. Capturing in precise detail the anatomy, behavior and habitat of ducks and swans, the five winners of this year’s competition are works of art.

Set amidst the backdrop of an opening reception for the East Carolina Wildlife Arts Festival, the five winners of the competition stood as a centerpiece of an event that brought together musicians, vendors and artists. This year, 23 entries from 13 states were submitted for the competition.

According to Paula Stevenson, with the Washington Tourism Development Authority, this year saw a record number of female artists, with 10 entries being painted by women. Of the 23 total entries, four were disqualified, as they depicted species not laid out in the contest rules by the N.C. Wildlife Resources Commission.

Of the 19 entries that were judged, five were tundra swans, four were blue-winged teals, seven were ring-necked ducks, one was a Bufflehead and two were Lesser Scaups. Winners of this year’s competition were: 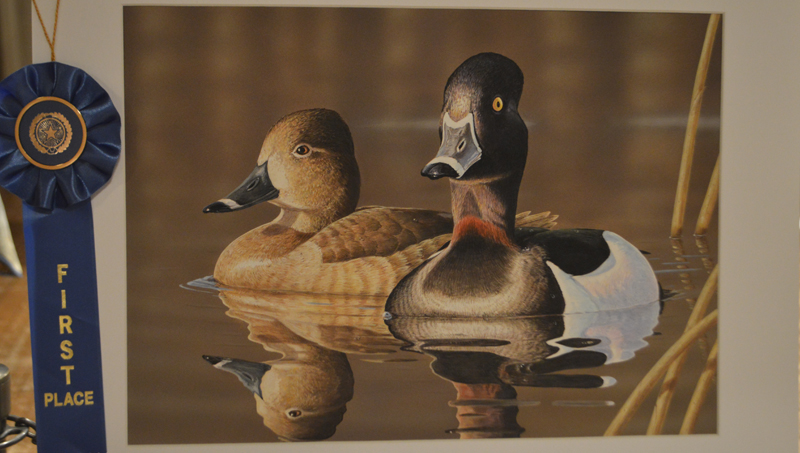 GRAND PRIZE: A painting of a ring-necked duck by Indiana artist Jeffery Klinefelter was the first-prize winner of the 2019 North Carolina Waterfowl Conservation Stamp competition. Depicted are a pair of ring-necked ducks. (Matt Debnam/Daily News) 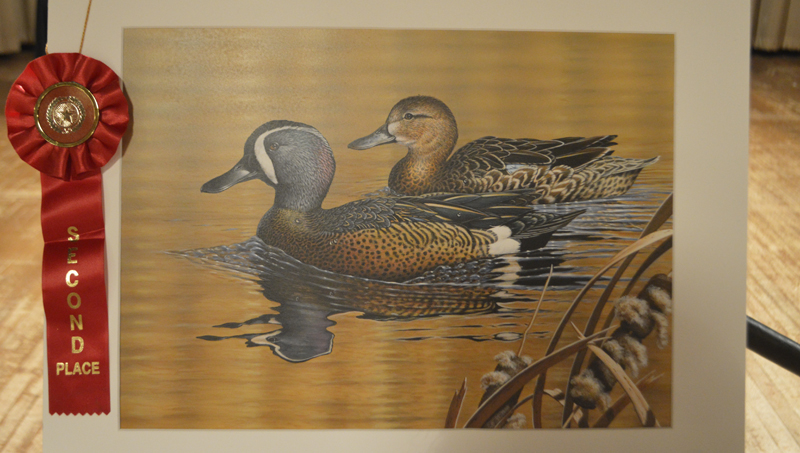 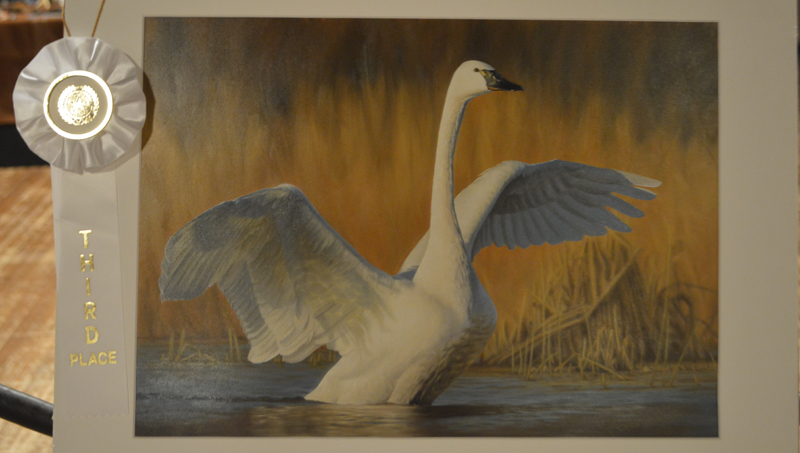 LANDING ZONE: A majestic tundra swan touches down on the water in this third-place winner from Rebekah Knight, of Missouri. Knight’s work was among 10 entries from female artists, a record for the competition. (Matt Debnam/Daily News) 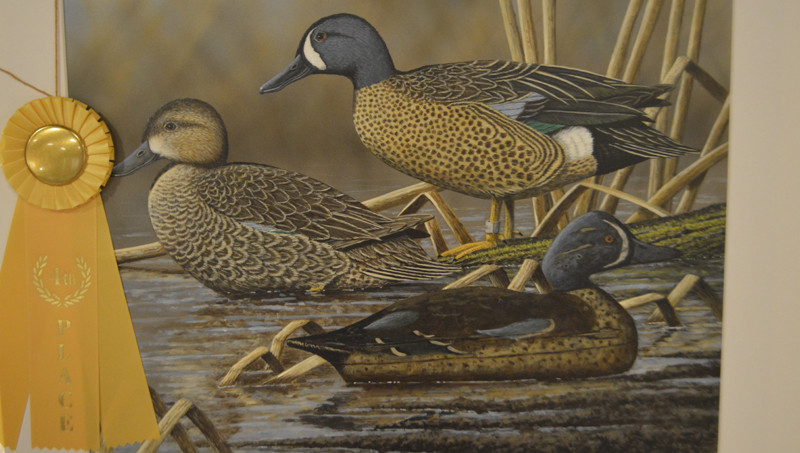 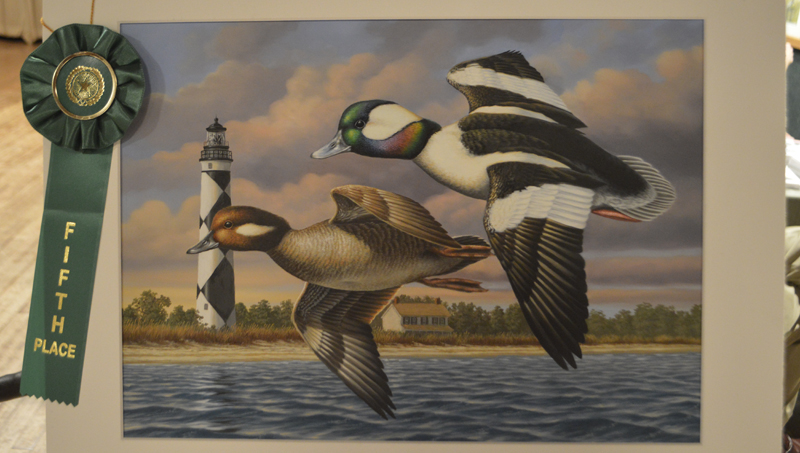 A PIECE OF HOME: A pair of Bufflehead ducks soar across the skies at Cape Lookout in this fifth-place piece from Guy Crittenden of Virginia. (Matt Debnam/Daily News)

As the overall winner, Klinefelter, who has submitted entries for multiple competitions, will receive $7,000 in prize money. Since the winning painting for 2019 was a ring-necked duck, that species will be taken out and a fifth new species will be added for the 2020 competition. 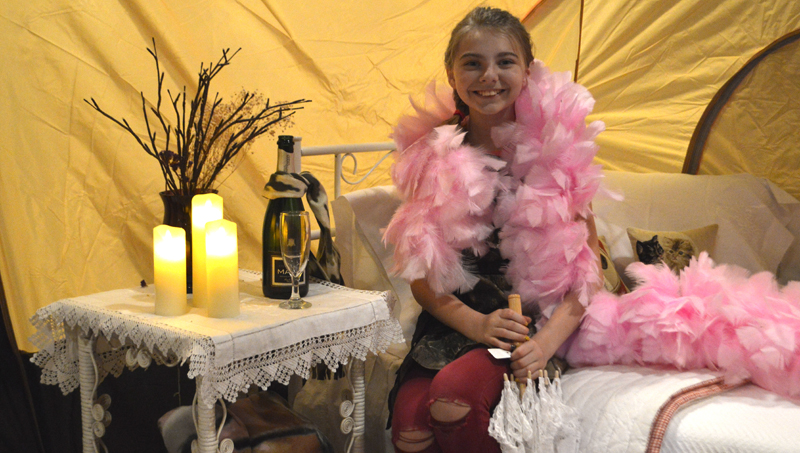 CAMPING IN STYLE: Natalie Shackelfurd, shows of the interior of the opulent “glamping” tent up for raffle by Arts of the Pamlico. The three-person tent, decorated by Jeffery Phipps and Gayle Watson, is complete with a boudoir and dining area, touched with camouflage accents. (Matt Debnam/Daily News)

The Wildlife Arts Festival continues throughout the day Saturday, with activities stretching from the Washington Civic Center to the North Carolina Estuarium. For a full schedule of events, visit www.artsofthepamlico.org/2018/06/09/23rd-annual-wildlife-festival. 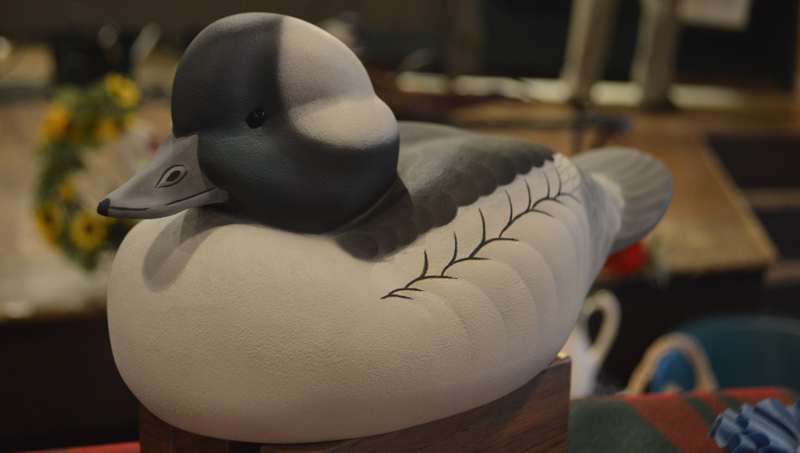 PRECISE CARVING: A Bufflehead drake decoy carved by local artist Mark Hicks is one of many that will be on display during the East Carolina Wildlife Arts Festival this weekend. (Matt Debnam/Daily News)

Savannah Jack is back. Headlined by Gatlin Brothers cousin Don Gatlin, the high-energy band is slated for a repeat performance... read more