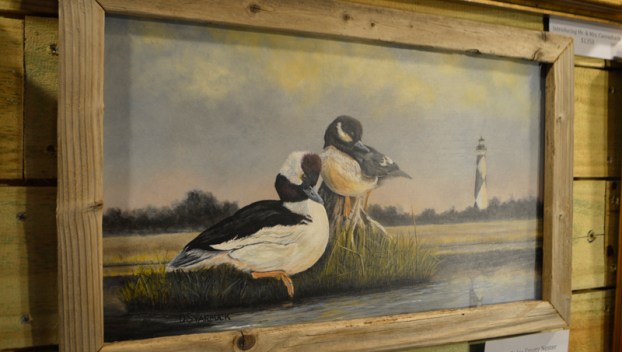 RENOWNED ARTIST: The works of David Starbuck, in addition to being featured at the East Carolina Wildlife Arts Festival, have also appeared in the annual N.C. Wildlife Resources Commission calendar. (Matt Debnam/Daily News)

“I only do a couple. It’s a lot of work. About the time you get everything there and pack everything up — I have big Tundra pickup truck, and had the thing packed to the ceiling almost,” he said. “I do a couple of these a year and participate in galleries, in venues in Wilmington. That’s where we’re from.”

“I came three years ago before they started it back up. The one thing that got my attention was the wildlife — the waterfowl. That’s what I enjoy doing.” Starbuck said. “I’m trying to find people who enjoy seeing the stuff that I paint. That’s a big part of why I am here.”

Colleen Knight is into pyrography — writing with fire. The wood-burner lives on East Main Street and is a member of the Washington Historic Preservation Commission. Knight explains how she became interest in pyrography.

“We were actually living in Michigan at the time. I had lot of time on my hands. I started doing tabletops. I did a game table. It was like checkers, chess set on top. It grew from there,” she said.

This year’s show is just her second one.

“I did this last year. It’s the second show I’ve ever done. I haven’t done one since then, until this one,” said Knight, adding that she’s a bit shy.

Meeting and interacting with visitors is key element of showing her work. “I think it’s great. The people are fantastic. Everybody is friendly. It’s nice. It’s fun. I think it’s a nice crowd,” she said.

Knight has moved on from tabletops. “I do a lot of everything. Outside of shows like this, I do a lot of pet portraits and a lot of dogs. I really enjoy anything with fur. Wood-burning lends itself well to furry animals,” she said.

Festival organizers use the festival to promote Washington.

Rebecca Clark, a festival volunteer worker and also a Historic Preservation Commission member, said the festival is important because brings people downtown during a slow period financially for many businesses.

“It’s very important to downtown,” she said. “This is one of the events that really brings in a lot of people. It brings them from out of town, which is very important to us as business owners. We love to introduce Little Washington to new people. We like for them to discover what we think is a hidden gem.”

It’s a problem we don’t always talk about, but teen dating violence is happening every day. Throughout the month of... read more