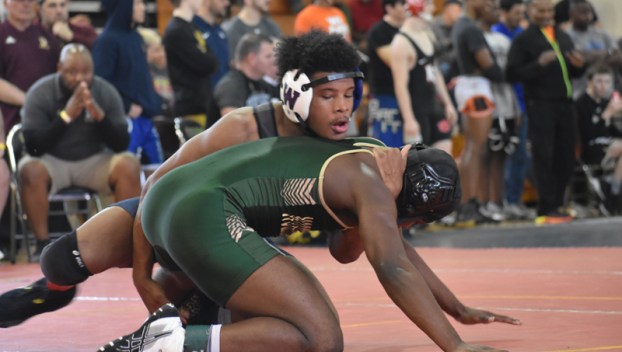 ON TO GREENSBORO: Washington’s Mykel Warren controls his opponent during the 2A East Regional Championship this past weekend. Warren finished fourth in the 152-pOund weight class to book a trip to the state championship, where he’ll be joined by eight teammates. (Sean Finnerty | Daily News)

NEWPORT — After getting knocked out of the third round of the dual-team state playoffs in heart-breaking fashion by Croatan on Jan. 31, the Washington wrestling team could have easily allowed the disappointment to overtake the rest of this season. But instead of wallowing in self-pity, the Pam Pack responded in resounding fashion.

Showing its true mettle, Washington traveled to Croatan Friday and Saturday for the 2A Eastern Regional Championship, where the Pam Pack won the regional title for the first time in school history and qualified nine wrestlers — the most in program history — to compete in the NCHSAA Individual Wrestling State Championship this Thursday, Friday and Saturday.

Scoring 170.5 points, Washington finished 31.5 points ahead of second-place Dixon. Washington head coach Chris Penhollow said he wasn’t quite expecting the outcome after how his team’s playoff run came to an end.

“I was actually surprised. They could’ve just thrown a pit party (after the disappointment of the dual-team playoffs) and shut it down and came out looking flat with no emotion, but they responded really, really well. I’m very proud of what they did,” Penhollow said. “It was also sweet to go to Croatan’s gym and win it, not that there’s any animosity. After (Jan. 31), it does make us feel a lot better about our program and where we’re heading.”

Henry Jennings, the third-ranked wrestler in the state in the 145-pound weight class, led the way for the Pam Pack over the weekend. The senior finished first in his weight division at the regional, winning three out of his four matches via pin, and emerging victorious in the first-place match with a 6-4 decision. Brodie Moore was Washington’s next-highest finisher, placing second in the 113-pound division.

The top-four finishers per each weight class qualify for the state championship, so Jennings and Moore will be joined by seven other Pam Pack members in Greensboro. Dylan Modlin (132 pounds) and Walt Gerard (170 pounds) both responded to a loss in the semifinals and quarterfinals, respectively, by winning the remainder of their matches to place third in their respective divisions and book a trip to the state championship. Also booking a spot by placing fourth were Isaac Campbell (106 pounds), Tristen Nixon (120 pounds), Gavin Woolard (126 pounds), Mykel Warren (152 pounds) and Logan Nichols (220 pounds).

While Washington is sending a record nine wrestlers to compete at the state championship, only Jennings and Nichols have prior experience competing at the event. Penhollow said wrestling in the Greensboro Coliseum, with its sheer size and atmosphere, can be jarring at first. But Washington’s coach will do what he can to prepare his guys.

“When they walk out on that floor for their match it’s a little overwhelming. You’ve got to try to keep them to focus on their mat and not everything else. But it is tough. Even Henry (Jennings) said last year (about) that first match, he said, ‘I wasn’t ready for it,’” Penhollow said. “Basically you want tell them to try to just keep looking down, get to the mat and focus on your mat. But it’s human instinct to look up and get blown away a little bit. That’s the main thing, trying to make sure you do what we’ve been doing all year and not trying to do something different now that we’re on this stage. And we’ll talk about all that stuff Thursday in preparation.”

The Pam Pack will head out for Greensboro Thursday and will begin the first round at 6 p.m. Action will resume Friday at 9 a.m. with matches taking place all day. The final day of the state championship is Saturday with the first matches slated to start at 9 a.m.

CARY — Powered in part by a sixth-place finish in the men’s 200 medley relay, the Washington swim team concluded... read more