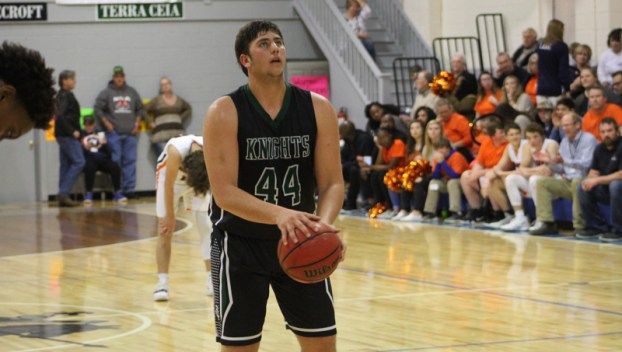 BELHAVEN — Despite leading for most of the game, the Terra Ceia boys basketball team came up short in the Tarheel Independent Conference Tournament championship game on Saturday at Pungo Christian Academy. The Knights fell, 46-42, to Hobgood Academy in a tight contest.

“I told them to leave no doubt,” he said. “We certainly did that, but we came up just short. I’m so proud of our team’s effort today. In the end, we lost to a great team. It’s tough when you give up a lead like that. When Matt [Van Staalduinen] picked up his fifth foul, it changed the whole game; it was difficult to handle.”

Terra Ceia nearly gave up its lead, as Hobgood squandered four chances in a row to tie the game with 3:30 left. Turnovers came into play in the final minutes with the Knights on the wrong end of those.

The Raiders forced consecutive turnovers and then hit a go-ahead 3-pointer with a minute to go. Terra Ceia failed to tie the game on its next possession and Hobgood iced the game with a run-out layup. Despite struggling for most of the game, the Raiders overcame the Knights due to some clutch plays late.

“Hobgood pressured us well and we didn’t shoot the ball well,” Klaassen added. “In games like this, you can’t turn the ball over in crucial situations. This is a great learning experience for us and it’ll help us be a better team in the future. It’s a game where we can think about it way down the road, but it’s a tough loss right now. I thought we deserved a better result for how well we played tonight. We can certainly use this to refocus for the state tournament.”

Terra Ceia opened the NCISAA 1A State Tournament last night with a trip to take on Commnity Christian School.