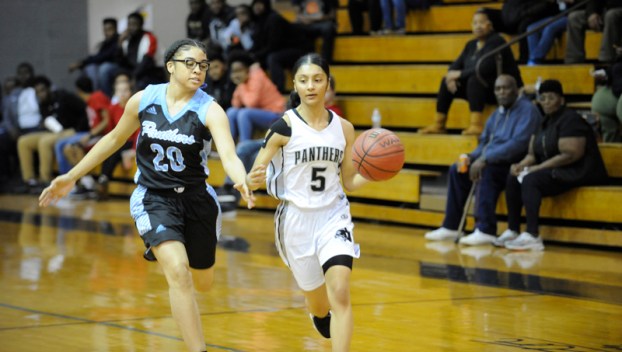 PINETOWN — Taking a break from its conference schedule, the Panthers welcomed Washington County and its six-game winning streak into Northside yesterday evening. It turned out to be a rough outing for the Northside Panthers, as they fell to the 1A Albemarle Conference leaders, 68-28.

Northside (8-9, 5-6 1A Coastal Plains Conference) struggled offensively for much of the game. Washington County (15-2, 8-1 1A AC) used a press to force Northside into turnover after turnover, converting them into points the other way. Making matters worse for the Northside Panthers, when they did successfully break the press and get into their half-court offense, they had difficulty getting the ball into the basket.

The Washington County Panthers, on the other hand, had no such issues on offense. When they weren’t scoring layups in transition, they were drilling mid-range jumpers and shots from behind the arc. Washington County made six 3-pointers in all, compared to just one from Northside, courtesy of Gabby Slade.

As a non-conference game, Northside head coach Michelle Leathers wanted to use the game as an opportunity to improve on some of her team’s areas of weakness, knowing how Washington County would try to force turnovers.

“We just tried to come out and work on some of the things that we need to work on. I knew that they were going to press us from the times in the past,” Leathers said. “But we turned the ball over, getting frustrated. I don’t know if it was because we were tired from last night playing Southside, or just getting frustrated.”

Washington County took control of the game early on, building a 16-9 lead after a quarter of play. Northside’s Ve’Era Holloway provided most of the offense for the home team in the period, scoring two baskets and adding a free throw, as she finished the game with five points. The second quarter was when Washington County really pulled away, scoring 27 points, while holding Northside to just five. The visiting Panthers held a 43-14 lead at the halftime break.

But it wasn’t all negative for Northside, as the third quarter saw the home team outscore Washington County, 14-12. The first four minutes of the stanza played out like much of the game, with Washington County pushing its lead to 52-17. Not giving up, Northside closed out the period on an 11-3 run. The Northside Panthers did so by cutting down on turnovers and cranking up the defensive pressure and forcing turnovers themselves, with Slade and Jessica Foster helping pressure Washington County ball handlers into turning the ball over.

Northside also began hitting some shots, with Slade making a 3-pointer and a mid-range jumper, and Foster sinking a baseline jumper as well. Prentiss Thomas also contributed to the late surge, knocking down a pair of shots, finishing the game with four points.

The fourth quarter saw the game revert back to how the first half played out, with Washington County scoring 13 points to trigger a running clock.

Even in the loss, Leathers said she saw some good things from her team, including a willingness to shoot, which has been lacking at times this season.

“I want her (Slade), and maybe a couple more, to shoot the shot, and that’s what I saw. Jessica (Foster) came and hit that corner shot. We need stuff like that,” Leathers said. “We can work on that in getting ready for Friday.”

Alexia Somers ended the game as Northside’s leading scorer with eight points. Slade was right behind her with seven, while Foster and Katie Godley each scored two points.

Northside closes out the regular season tomorrow with a trip to Jones Senior. The Panthers will then host a first-round matchup in the conference tournament against an opponent still to be determined.

PINETOWN — All the Panthers fans in attendance for the pregame Senior Night ceremony were treated to an exciting game... read more