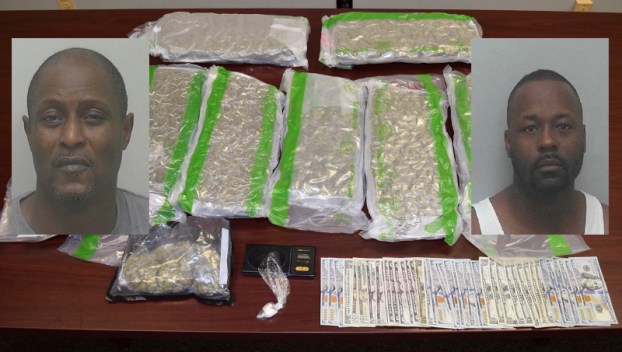 Two charged with trafficking pot from NY to Beaufort County

A 500-plus mile road trip ended in the Beaufort County Detention Center for two men from New York. Beaufort County Sheriff’s Office Drug Unit investigators arrested the two on charges of trafficking 10 pounds of marijuana from the Empire State to Beaufort County.

According to BCSO Drug Unit Lt. Russell Davenport, the arrests were the result of months of investigation, leading from lower-level dealers to the New York connection. Cooperating with New York law enforcement agencies, investigators were able to track the movements of the suspects between New York and North Carolina.

James Earl Moore, 51, of 273 Franklin Avenue, Mount Vernon, New York, was charged with trafficking marijuana, possession with intent to sell and deliver cocaine, maintaining a vehicle for the purpose of storing and selling a controlled substance and possession of drug paraphernalia. Moore is originally from Washington, Davenport confirmed.

When the two came into Beaufort County via U.S. Highway 17 on Tuesday, the BCSO was waiting for them. During a traffic stop, investigators found 10 pounds of marijuana, five grams of cocaine, a digital scale and $2,000 in cash. Davenport estimates the street value of the drugs at approximately $40,000.

While the Interstate 95 corridor is a well-known north-south drug trafficking route, Davenport said U.S. Highway 17, and its extensions to the north and south, also see a significant amount of drug activity.

“We have made many cases where people were trafficking drugs on U.S. 17 north to south,” Davenport said. “We also see money cases where people are bringing money back and forth. Because it’s not I-95, we don’t see it as much, but we still have it. People that are involved in trafficking, sometimes they know that the law is working I-95, and they try to stay off the main interstate.”

While medicinal marijuana is legal in New York, Davenport said neither Moore nor Marks had a medical marijuana card, and there was no evidence that any of the pot was obtained from legal sources.

“These arrests are a direct result of my Drug Unit being equipped with up-to-date technology and working with other law enforcement agencies throughout the United States to stop illegal drugs from entering Beaufort County, poisoning our citizens and destroying families,” Beaufort County Sheriff Ernie Coleman stated.

Both Moore and Marks were detained in the Beaufort County Detention Center under $250,000 secured bonds.

Two hundred years ago, few houses lined the north side of what was likely a single lane dirt road. The... read more