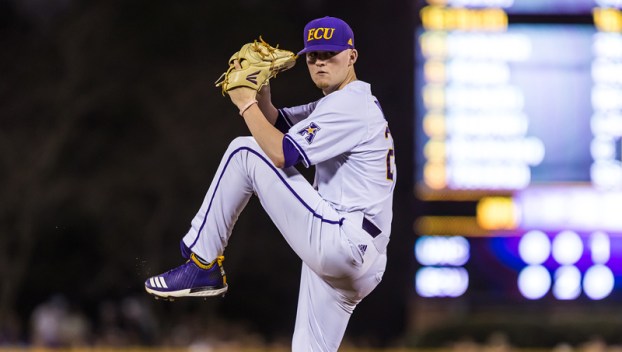 Burleson, Brickhouse give Pirates game one win on Opening Day

GREENVILLE — No. 11 East Carolina broke open a two-all deadlock tie in the bottom of the sixth inning when first baseman Spencer Brickhouse cranked a two-run home run over the right field wall onto the football practice field for his third-straight homer on Opening Day. The Pirates went on to win game one of their double header over Radford today, 6-2.

The Pirates (1-0) grabbed the early lead in the bottom of the first inning, thanks to pitcher Alec Burleson’s RBI single into right field from the No. 5 spot that brought home Bryson Worrell, who singled to the shortstop earlier in the inning. However, Radford (0-1) gained the lead in the top of the third with back-to-back home runs from Garrett Matheny and Kyle Butler. Answering quickly, Pirates tied the game in the bottom of the inning with a sacrifice bunt from Brady Lloyd that brought home Jake Washer.

After two scoreless innings, Brickhouse belted his two-run home run in the bottom of the sixth, making way for a piggyback of success for the remainder of the game. Brickhouse picked up his third RBI in the bottom of the next inning on a single to right field that scored Turner Brown. Earlier in the same inning, Bryant Packard hit a sacrifice fly to left field to drive home ECU’s lead-off man in the inning, Lane Hoover. Packard, who racked up the preseason accolades, went 0-for-4 in the game however, with that being his lone highlight.

Burleson helped himself on the mound as he supplied offense for himself, going 4-for-5 in the game. No other Pirate had more than two hits, but ECU mustered 13 hits in the game. Seven starters registered at least one hit, with Packard and transfer right fielder Christian Smallwood being held without a hit.

“I thought Burly (Burleson) battled, I don’t think he had his best command, but that’s why we run him out there on Friday night because even if he doesn’t have his best stuff, he can still kind of maneuver through the game,” ECU head coach Cliff Godwin said.

Although Burleson started the game, reliever Trey Benton got the win after Burleson pitched five innings into a no decision. In his time on the mound, Burleson gave up three hits, two earned runs and a walk, while recording four strikeouts. Benton’s effort saw 2.1 innings, one hit, zero earned runs, one walk and one strikeout.

“It felt good (even though) I didn’t have my best stuff. I battled with what I had, (but) I just feel like for myself I threw too many balls,” Burleson said. “I didn’t get a lot of first-pitch strikes, wasn’t ahead on a lot of counts, so I wasn’t able to ‘pitch’. I was just trying to get back in counts but it gives me something to build off of and get better.”

Game two of the Opening Day double header is scheduled to be played 45 minutes after the conclusion of game one.

Garrett Rose’s play on the court steals the show

PINETOWN — For those in attendance for the Northside boys basketball team’s matchup with Mattamuskeet Wednesday night, the fact the... read more