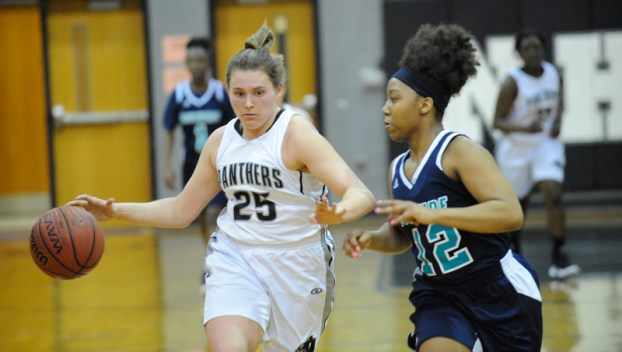 Northside moves on in CPC Tournament after downing Southside

PINETOWN — After building a 12-point halftime lead during Monday’s first-round game of the Coastal Plains Conference Tournament, the Northside girls basketball team withstood a Southside barrage of 3-pointers in the latter stages of the game to hold on for a 65-55 victory and move on in the tournament, while eliminating the Seahawks.

“Just held on at the end,” Northside head coach Michelle Leathers said. “I think they (the Seahawks) cut it down to six or nine or something like that. And I knew we had to get up, step up our defense. But they hit some big shots at the end. They hit some 3’s and the last couple of times we played them they didn’t hit those shots. But they hit some good shots.”

Holding a 31-19 lead at halftime, Northside (10-9, 6-6 1A CPC) did well enough to maintain its lead when Southside (8-13, 3-9 1A CPC) began to heat up from behind the arc. Jasmine Blango and Shantel Cannon hit some 3’s early on in the third, but good ball movement from the Panthers saw Ve’Era Holloway and Alexia Somers get good looks at the basket. Thanks to Holloway’s eight points and Somers’ four points in the period, Northside preserved a 12-to-14-point lead, that stretched to 17 at one point, for most of the third.

But the Seahawks’ shots from distance kept falling, with Cannon hitting three by herself in the third quarter. The junior’s final 3-pointer of the stanza brought Southside within eight points with 0:20 left in the period. A Northside free throw in the final seconds gave the Panthers a 49-40 lead heading into the final quarter.

Blango and Laquisha Woolard each drained another 3-point shot in the fourth quarter, but the well eventually dried up for Southside. Through Somers, Holloway and Katie Godley, Northside dominated the boards, gobbling up rebounds to make sure Southside couldn’t extend possessions with offensive rebounds. Somers, who lead all scorers with 22 points, scored eight of them in the final period to help ensure the Seahawks never pulled within closer than nine.

Holloway finished with 18 points, while Godley chipped in with 10. Southside freshman Blango led the Seahawks with 20 points, while Cannon’s four made 3-pointers helped her reach 16 points.

The effort the Seahawks played with, especially late in an attempt to rally, had Southside head coach Milton Ruffin feeling good about his squad, which has no seniors, moving forward.

“There’s no such thing as a moral victory, but I was really pleased with the way they played; with the effort they did and the energy that they displayed out there. They played some good basketball and it was a good game to coach and also a good game to watch. Although we didn’t win the ball game, I was very pleased with how we played,” Ruffin said. “I told them, the way they played tonight, we can build on that. And a lot of them have good potential, so we’re looking forward to next year and keeping everybody intact.”

The win set up Northside to play Pamlico County today in the semifinals of the CPC Tournament. Southside will find out Saturday if it will receive an invitation to the playoffs.

Southside knocked out of conference tournament to end season

By LAIEKE ABEBE For the Daily News WILLIAMSTON —A tough season for the Southside boys basketball team came to an... read more