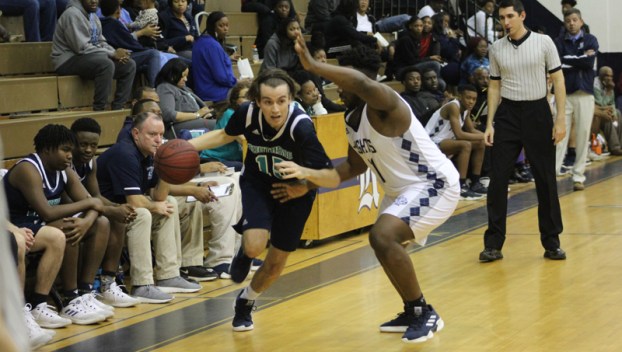 Southside knocked out of conference tournament to end season

WILLIAMSTON —A tough season for the Southside boys basketball team came to an end Monday night, as the Seahawks trailed from start to finish in a 77-42 loss to Riverside in the first round of the Coastal Plains Conference Tournament.

While ending the year on a four-game losing streak, Southside (5-18, 1-11 1A CPC) was competitive in a lot of games and played with a lot of effort and intensity. In the end, Riverside (16-18, 10-2 1A CPC) was able to get out on the break and get a lot of easy shots to advance to the conference semifinals.

The Knights started the game strong with a 10-2 run in the first quarter, while Southside didn’t make a shot for the first six minutes. The Knights played with a chip on their shoulder after losing the regular season conference title last Friday to Pamlico County. The Seahawks found themselves trailing 24-6 at the end of the first and it didn’t get better.

Things improved a bit for Southside as halftime approached, but the Knights withstood the rally. The Seahawks fell behind by 25, but cut the deficit down to 10. Hundley Stallings hit a couple of 3’s to spark the run. However, an 11-0 run by Riverside gave the hosts a 41-20 halftime lead.

“We cut the lead to 10 and we didn’t give up,” Southside head coach Sean White. “Although they (the Knights) did get a run to end the half, the effort was there. They’ve shown that they can play with anyone, but we have to play complete games next season. We’ll be fine if we hustle and do the little things. No matter what the result is, if my team is satisfied with their effort, then I’m satisfied with their play.”

The Knights continued extending their lead in the second half. Midway through the third quarter, Southside’s deficit went up to 30. By then, the Seahawks were out of the game as Riverside padded their lead. The Knights led 67-28 at the end of the third and didn’t look back in the fourth quarter.

Hundley Stallings scored 12 points to lead the Seahawks and senior Jalen Kirkman added 10. Southside will lose a lot of seniors, but they’ll have some key contributors coming back as well, including Stallings and Ty Smith. White talked about the growth of his team after the game.

“I think we’ve grown as a team,” White said. “I wish I had my new seniors for more than one year. We’ve had a lot of good players transfer so it was basically a new team. I’ll tell anyone that this has been the most coachable team I’ve had in my career. They always do what I ask them to do and I’ll miss this group of seniors.”

The Lady Pam Pack holds off West Craven for win VANCEBORO — Overcoming a slow start on the road, the... read more