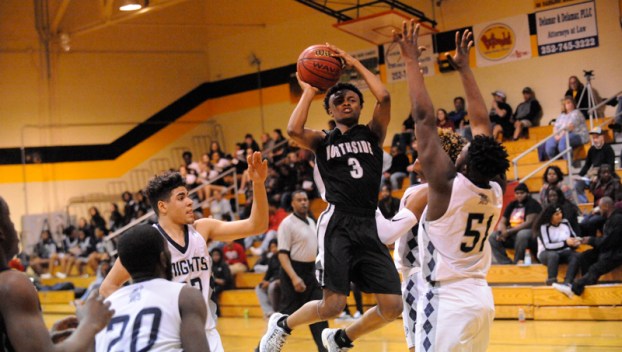 HANG TIME: Rashod Smith hangs in the air to get a shot off while surrounded by Knights last night during Northside’s conference tournament semifinal win over Riverside. (Sean Finnerty | Daily News)

BAYBORO — Northside’s chances of making it to the Coastal Plains Conference Tournament championship game looked to take a major hit when star guard Johnathan Clark fouled out of last night’s semifinal against Riverside with the Panthers up by just a point and three minutes remaining on the clock.

But Clark’s teammates rose to the occasion, making some crucial stops on defense late, while Northside’s other dynamic backcourt player, Rashod Smith, expertly ran the offense, setting up one basket before coolly drilling seven free throws in the final 30 seconds to cement the 72-64 victory.

Northside head coach Jared Adams said his plan late in the game was to spread the floor out and allow Smith, who scored a game-high 23 points, to make the plays necessary to book the Panthers (17-7, 8-4 1A CPC) a spot in tomorrow’s conference championship game.

“Last few minutes of the game I want the ball in his (Smith’s) hands and he was able to finish it for us tonight,” Adams said. “We battled back there towards the end, getting the four-, five-point lead, abled to work the clock a little bit and was able to pull this tight game out. It was a good ballgame.”

With the game knotted up at 49-49 at the start of the fourth, Clark began the final period on the bench due to foul trouble. Northside and Riverside (16-9, 10-2 1A CPC) traded baskets like two heavyweight boxers swapping blows in a championship bout, refusing to go down. When Smith converted a three-point play on an acrobatic layup in traffic, the Knights answered right back with a 3-point shot.

Clark checked back in at the 4:04 mark of the fourth with Northside leading, 58-57. Riverside’s Jay Leavelle banked in a 3-pointer on the Knights’ next possession, but Clark answered right back with a corner 3 of his own to give the Panthers the lead right back, 61-60. Unfortunately for Northside and Clark, whose 19 points were only behind Smith’s output, he picked up a charge on the next possession to foul out of the game.

Not letting their heads hang with one of their best players confined to the bench, the Panthers limited Riverside to only four points over the game’s final three minutes, even with the Knights using their size to grab offensive rebound after offensive rebound. Northside had limited success forcing turnovers over the course of the game, but Smith, Kenneth Winfield and B.J. Paniagua combined for several steals in the final minutes.

As a team that’s at its best running up and down the court and overwhelming teams, Northside looked quite natural with Smith running the point and slowing things down late. After a long, patient possession that took nearly a minute off the clock, Smith found a cutting Tyler Turner for a layup, giving the Panthers a 65-62 lead with 1:02 left.

The Knights hit two free throws to make it a one-point game with 0:58 left, but Smith used his excellent dribbling skills to draw fouls and go to the line, icing the victory with seven free throws in the final moments.

While Riverside outscored Northside 21-11 in the third to tie the game heading into the final quarter, it was the Panthers who started the game off hot. Smith and Clark each hit a trio of 3’s in the opening period, helping Northside build a 24-14 lead through the first eight minutes of play. Clark and Winfield both added a 3-pointer in the second to ensure the Panthers went to halftime with a 38-28 lead.

“Any time we play a team with that much height, a couple guys who are 6-4, from the outside we’re going to have to shoot the ball to have a chance. And we shot the ball, not our best, but we shot the ball decent the first half, and it kind of built up a lead. And we were just able to maintain that throughout the game,” Adams said.

While Smith and Clark were the game’s top two scorers, Winfield contributed with 14 points, Turner scored six, Paniagua and Zach Green both chipped in with four and Carter Boyd scored two points.

By JUNIOUS SMITH III From the Neuse News LA GRANGE — Washington now has its shot with Kinston. The Pam... read more