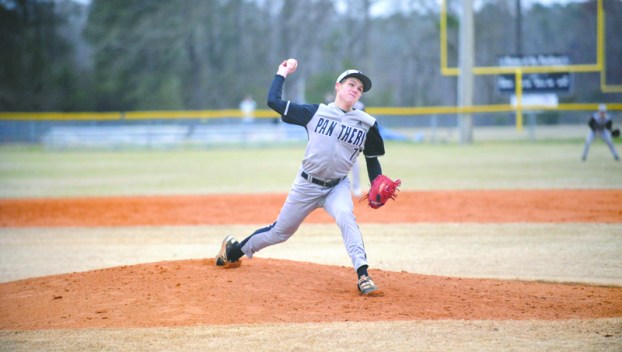 BRINGING THE HEAT: Ryan Cornelius fires in a pitch against the Chargers on Friday. The sophomore struck out four Ayden-Grifton batters in four innings of work, helping the Panthers get back into the game. (Sean Finnerty | Daily News)

Northside battles in the cold rain, falls in extra innings

PINETOWN — Northside baseball fans who braved the bitter cold and rain Friday were treated to a back-and-forth game between Northside and Ayden-Grifton, as the Panthers clawed back from a four-run deficit to take the lead in the fifth inning, only for the Chargers to tie the ballgame in the sixth before handing Northside a 9-6 loss in eight innings.

“I was very pleased with the way we fought,” Northside head coach Keith Boyd said. “One of those games that teeter-tottered back and forth and we get down, we come back and tie it, got up, tied it again. You know, we’ve just come up a little short there, but hats off to them. They’re a good team and we fought them right to the end.”

Northside (0-2 1A Coastal Plains Conference) was first to get on the board after starting pitcher Carter Boyd retired the side in the top of the first. Ayden-Grifton (2-1 2A Eastern Carolina Conference) committed seven errors in the game, including three in the bottom of the first that helped the Panthers score. Northside’s Douglas Dixon reached base thanks to a Chargers’ fielding error and eventually scored when the throw to first after Matthew Adams’ groundball sailed over the first baseman’s head.

Ayden-Grifton responded immediately, hitting a pair of doubles on the way to scoring four runs in the top of the second to take a 4-1 lead. The Chargers added a fifth run in the third, when Jackson Upchurch scored on a Panthers’ fielding error after drawing a walk, stealing second and then advancing to third on a passed ball.

Trailing 5-1 with no outs, Northside was in danger of falling behind by even more. But Cameron Craig, Dawson Boyd and Dixon combined for the 6-4-3 double play and Carter Boyd got the next Charger to fly out to center field to end the inning and limit the damage.

Northside made a pitching change trailing 5-1 in the top of the fourth, putting Ryan Cornelius on the mound and moving Carter Boyd to catcher. The change paid immediate dividends, as Cornelius allowed only one base runner — a hit batter — through the fourth and fifth innings, finishing the game with four strikeouts while giving up a run and three hits in four innings.

Keith Boyd said Cornelius’ performance on the mound, combined with some nice defensive plays in the field, helped the Panthers get back in the game.

“We felt like we needed a change. Carter threw well and Ryan came in and kind of held them at bay and allowed us to gather some momentum,” Boyd said.

After Cornelius kept Ayden-Grifton from scoring any more runs for two innings, the Panthers responded with a five-run fifth inning to take a 6-5 lead. Samuel Holland led off by taking first on a dropped third strike, followed by a Tyler Modlin single. Craig, who led Northside with two hits and two RBI, drove the pair home by dropping a triple just inside the left-field line.

Dawson Boyd followed with an RBI-single. Another Chargers’ error allowed Dawson Boyd to score, tying the game, and a Caleb Alligood RBI base hit gave Northside a 6-5 lead.

Northside looked set to get out of the top of the sixth with its lead intact, after Cornelius struck out a Charger and Holland made a diving catch in right field. But after a walk, a stolen base and a passed ball, Ayden-Grifton had a man on third. A single into center field drove him home, tying the game, 6-6.

After a scoreless seventh, the Chargers’ bats got back to doing damage in the eighth, scoring three runs. Once again, a pair of doubles powered Ayden-Grifton’s scoring spree, as an RBI-single supplied the final run.

Two Chargers’ errors in the bottom of the eighth appeared to give Northside life, as the Panthers put runners on first and second with two outs. But Northside couldn’t get the big hit it needed.

While not able to pick up its first win of the young season, Northside showed considerable improvement compared to the 20-1 season-opening loss to Washington on Thursday.

“That’s what I was looking for last night (Thursday night). We’ve got a little talent, we’re just so darn young and our pitching has got to develop. We’re not going to throw it by anybody, but I did feel like going into last night we were a solid defensive team, which that showed up tonight (Friday night),” Keith Boyd said. “We’re going to have to hit the ball like we did about the third or fourth inning — we were sort of picking up and hitting the ball like I know we can hit it.”

The Panthers return to action Wednesday with a trip to Bear Grass Charter. First pitch is set for 6 p.m.