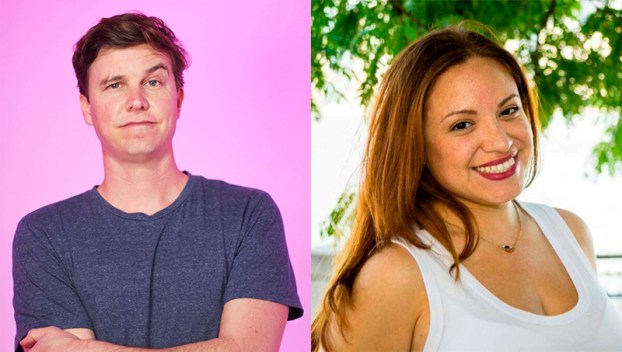 BARREL OF LAUGHS: Stand-up comedians Shari Diaz and Jeremy Adler headline two comedy shows slated for Saturday at the Turnage Theatre. Adler will perform during the family friendly show, while Diaz will highlight the adult-oriented comedy portion of the evening. (Arts of the Pamlico)

A “laugh feast in the east” is coming to Washington this weekend.

The second-annual Washington Comedy Fest is set for Saturday at Arts of the Pamlico’s Turnage Theatre. The festival starts in the afternoon with a comedy improv workshop from 2 p.m. to 3 p.m., followed by a stand-up comedy workshop from 3 to 4 p.m.

Comedy the whole family can enjoy begins at 5:30 p.m., hosted by comedian Jake Weddle and featuring a lineup of stand-up performers, capped off by headliner Jeremy Adler. A homeschooler, former minister and single dad of four, Adler draws on his unique life experiences to deliver thoughtful, surprising takes on relationships, parenting, religion and everything in between, according to Adler’s bio.

“As the only Latina comic in North Carolina, her crossover appeal, crowd-working skills, observant and clever style has quickly built a platform and a diverse following ranging from hipsters to moms screaming for a night out,” reads Diaz’s bio.

Live music will be played between sets and concessions will be available.

Comedians were selected for the festival via online auditions, according to Debra Torrence, AOP’s executive director. With organization by William White, of AOP’s regular improv troupe, I.C. Comedy, AOP is building on last year’s event.

“We’re growing this festival. This is only our second year, so it’s a new thing,” Torrence said. “It’ll be an intimate-type setting out front in the gallery, with a variety of comedians.”

Torrence said the festival, as well as the number of improv and stand-up shows being offered at the Turnage, is part of AOP’s mission to bring more art, and art genres, to more people.

“I think the importance of doing this is it’s a type of art we’re trying to grow here, and we’re drawing people from across the county and beyond,” Torrence said. “It’s good for families, it’s good for couples, it’s good for individuals, and it’s a great way to come downtown and have a dinner and see a show.”

From a dusting of snow expected in the early hours of Wednesday morning to a high of nearly 70 degrees... read more