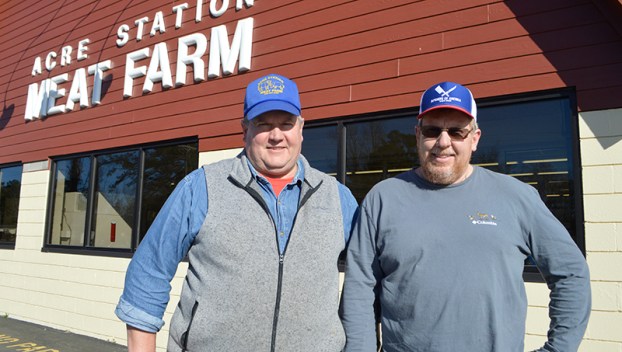 PINETOWN —It all started with an old dairy farm in Pinetown.

In 1977, German immigrant Ernest Huettmann and his wife, Nancy, along with their children Ronnie and Richard, moved from New Jersey to rural Beaufort County to start their own business.

In 2019, 42 years later, that same business the Huettmanns built in Pinetown is still going strong, led by the brothers Ronnie and Richard. In January, Acre Station Meat Farm was recognized for its legacy of customer service as the Washington-Beaufort County Chamber of Commerce Business of the Year.

When Ernest Huettmann started the business in 1977, it began as a butcher shop where local farmers could have their meats processed. He had learned the skill in Germany at the tender age of 16 before moving to America. Nancy, who had family in the Terra Ceia area, was the first to introduce him to Beaufort County during an Easter holiday.

“The area around here reminded him so much of Germany that he told our mother’s aunt that if there was ever a farm that became available, he would like to retire here in North Carolina,” Ronnie Huettmann said.

Within a few weeks, he was signing the papers to buy the farm where Acre Station Meat Farm now stands. In its beginning, the business served as a butcher shop where local farmers could have their meats processed. During the 1980s and ’90s, the business grew as a retail store as processing declined, offering a full range of grocery options. Then, in the past two decades, as sustainable processing and farm-to-fork business models have come into fashion, the processing business picked up again.

“Starting back in 2001 and 2002, we started out small with just a few farmers and had deer processing, as well,” Richard Huettmann said. “As the years progressed, we are now hooked up with Whole Foods, Cheney Brothers and a company called First Hand Foods. So we’ve kind of grown into those outlets that we’re able to process.”

Located in the rural Beaufort County on N.C. Highway 32, the store provides a convenient place to shop for Pinetown residents who might have to otherwise drive to Washington, Belhaven or Plymouth. This convenience, coupled with providing quality products and customer service, has helped sustain the business over the years.

“It’s about treating people fairly, listening to the customers, appreciating our customers and making sure that they’re getting what they deserve, which is a good-quality product at a reasonable price,” Ronnie Huettmann said.

In both its retail and processing aspects, the Huettmann brothers see a bright future for the business their father began. From a growing population to boost the retail market to the potential of a new sales venue in the Washington Harbor District Market, Acre Station Meat Farm has room to expand on its success.

“What we look at is a farm-to-fork, sustainable food business,” Richard Huettmann said. “The more people that are educated about healthy food and buying local, the more our business will continue to grow.”

A “laugh feast in the east” is coming to Washington this weekend. The second-annual Washington Comedy Fest is set for... read more