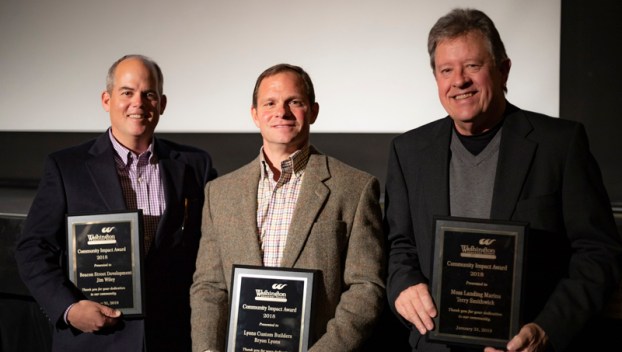 COMMUNITY LEADERS: For their respective contributions to the development of Moss Landing, Jim Wiley, Bryon Lyons and Terry Smithwick were each recognized with the Washington-Beaufort County Chamber of Commerce Community Impact Award. (Michelle Hooper)

When it comes to community impact, few areas of Washington can claim to have seen so dramatic a transformation in the past 20 years as the piece of land that today houses the Moss Landing community.

In the past decade, three minds have helped guide that transformation, and it was for that vision that the Washington-Beaufort County Chamber of Commerce recognized Jim Wiley, Bryon Lyons and Terry Smithwick with its Community Impact Award. Each has left a mark on the waterfront community.

Toward the end of the 20th century, the land was still a part of the old Moss Planing Mill, and in the early 2000s, the city of Washington purchased the land and built a boardwalk and the man-made wetlands that serve as a catch basin and filtration system for downtown runoff.

After a number of years, the city decided to sell the property for redevelopment, and the result was a neighborhood of condominiums on the site. When the recession hit in 2008, however, those fortunes turned, and Wiley found his chance to develop the property.

Purchasing six of the eight acres that had yet to be developed, Wiley and his firm, Beacon Street, decided to begin building single-family homes on the site. Overseeing the construction of those homes, Lyons Custom Builders ensures quality for each site that goes up at Moss Landing, according to Wiley. Smithwick, meanwhile, with Moss Landing Marina, offers slips for boat owners, a ships store and a family-run coffee and ice cream shop.

Together, they have made Moss Landing what it is today — a thriving neighborhood. Providing an overall vision, quality construction and opportunities for recreation, Wiley compares the various components and businesses involved at Moss Landing to the pieces of symphony working in concert.

“I think at the end of the day, everybody is looking to lift all boats,” Wiley said. “If we can build a community that our customers love, that strengthens Washington at the same time and makes it more beautiful, then you’re satisfied on a multitude of levels.”

The North Carolina Marine Fisheries Commission is taking a stand on regulations that would maximize recovery of the striped bass... read more