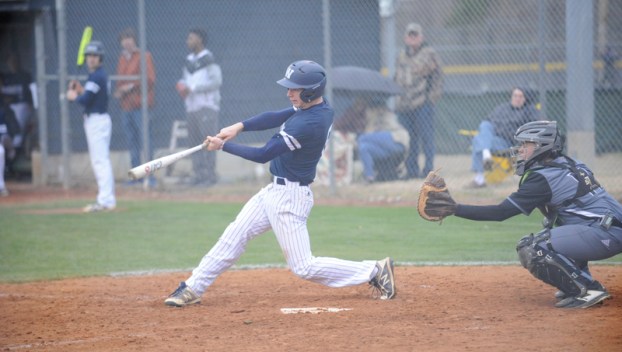 SETTING THE TABLE: Washington’s Hayden Anderson takes a swing during a game earlier this season. Anderson finished 1-for-3 with two runs scored as the Pam Pack’s leadoff man during yesterday’s win over Greene Central.

WASHINGTON — All even with Greene Central through four innings yesterday, the Pam Pack exploded for 11 runs in the fifth and sixth innings to win the first conference game of the season, 16-6, in six innings.

Washington (5-1, 1-0 2A Eastern Carolina Conference) didn’t get off to the smoothest start, as a dropped third strike allowed the Greene Central (1-2, 0-1 2A ECC) leadoff man to reach first before scoring on a Pam Pack error. But Washington responded with five runs off of five hits in the bottom of the first.

The Rams scored four runs in the third to tie the game at 5-5 without recording a hit, instead taking advantage of four walks and another Pam Pack error. Greene Central tacked on another run in the fourth to take its first lead of the game, but it didn’t last long.

Washington added five runs in the fifth and poured on six more in the sixth, combining a mixture of singles, doubles and drawn walks, while also taking advantage of three Rams’ errors to reach a 10-run lead to end the game.

Washington had 13 hits as a team and Hunter Hall led all hitters, going 4-for-4 with three doubles and two RBIs. Robert Pollock drove in four runs, while hitting a double and drawing two walks. Logan Everette, Will Crisp and Wilson Peed all had multiple RBIs on the night, with three, two and two, respectively.

Everette got the start on the mound, striking out nine Rams and giving up five runs — two of which were unearned— on one hit in three innings. Hall relieved Everette, recording seven strikeouts, while giving up a run on two hits.

PINETOWN — A seven-run fourth inning by Pamlico County proved too much for Northside to overcome last night, as the Panthers fell at home to the Hurricanes, 12-7.

Northside (0-5, 0-1 1A Coastal Plains Conference) jumped out to a 3-0 lead, scoring in the first when a Pamlico County (1-4, 1A CPC) error allowed Cameron Craig to score. Douglas Dixon drew a walk to score Tyler Harris and Matthew Adams hit an RBI-single in the second to increase the Panthers’ lead.

Adams, Harris, Craig, Tyler Modlin and Dawson Boyd each recorded a hit for Northside, while Adams led the Panthers with two RBIs and Dixon got one himself. Ryan Cornelius, Boyd, Adams and Craig all saw time on the mound for Northside, with Cornelius and Adams each striking out five Hurricanes.

CHOCOWINITY — Playing North Pitt for the second time in eight days, Southside kept the game close until the Panthers tacked on seven runs in the final two innings to hand Southside a 12-3 loss at home yesterday.

Southside (0-2 1A Coastal Plains Conference) found itself trailing 4-0 through three and a half innings after North Pitt (7-0 2A Eastern Plains Conference) plated a run in the first, scored two more in the third and added another run in the top of the fourth. The Seahawks cut their deficit to two when they scored twice in the bottom of the fourth and answered immediately when the Panthers added a run in the top of the fifth, scoring a third run in the bottom of the inning to make the score 5-3 in the visitors’ favor.

But any hope of Southside winning its home opener was dashed, as North Pitt scored five runs in the sixth and added two more in the seventh, while the Seahawks’ bats went cold.

Will Warren, Bryan Gutierrez, Hundley Stallings and Noah Squires all recorded a hit for the Seahawks, as Warren, Gutierrez and Stallings all scored a run as well. Stallings, Matthew Bullock and Logan Langley all split time on the mound, as Bullock finished with three strikeouts in four innings pitched.