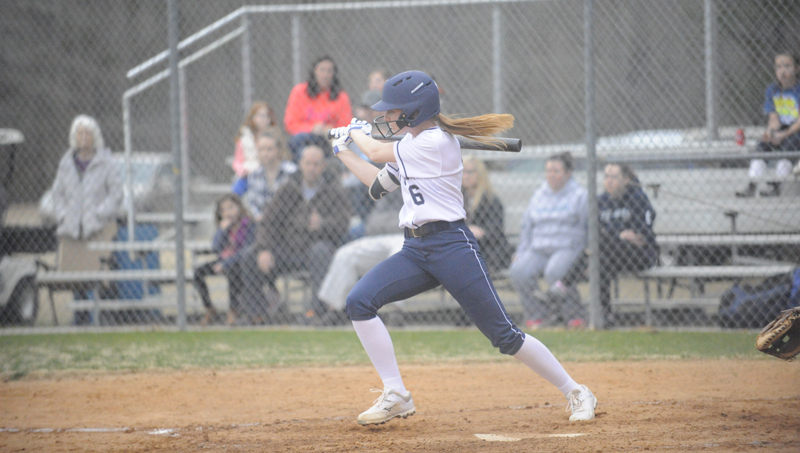 FLUID SWING: Washington’s Summer Campbell follows through on her swing during a game earlier this season. Campbell finished 1-for-4 with an RBI in yesterday’s win over North Lenoir. (Sean Finnerty | Daily News)

CHOCOWINITY — Southside played the role of unwelcoming host yesterday, battering Mattamuskeet, 14-4, in five innings for its third consecutive victory to start the season.

Mattamuskeet plated two runs in the fourth to cut its deficit to a single run at 4-3. But the Seahawks weren’t content with just a one-run lead and exploded for eight runs in the bottom of the inning to take firm control of the game. The Lakers scored a run in the fifth, but Southside responded by scoring two more runs to create a 10-run lead and end the game.

Southside’s Marah Gottwalt led all hitters, finishing 4-for-4 with a home run, a double and three RBIs. Laura Hodges and Shantel Cannon were the other Seahawks with multiple hits with three and two, respectively, as every Southside player had at least one hit in the game. Askew and Madison Easly each had two RBIs, and Cannon, Hodges, Mallory Nobles and Delaney Ayers each chipped in with an RBI.

LA GRANGE — It took a while to get going, but after three scoreless innings yesterday Washington experienced an offensive explosion to take down North Lenoir on the road, 17-2.

With the score still 0-0 in the top of the fourth the Pam Pack (4-0, 2-0 2A Eastern Carolina Conference) finally broke through, scoring six runs. Washington added three more runs in the sixth before defensive errors in the bottom of the inning allowed North Lenoir (2-3, 1-1 2A ECC) to score two runs of its own. The Pam Pack answered with eight runs scored in the seventh to quash any hopes of a Hawks’ comeback.

Washington finished with 14 hits and 14 RBIs, as Desiree Maurizzio led the way at the plate, going 4-for-5 with a double and four RBIs. Emme Davis, Abbi Tucker and Lily Wright were the other Pam Pack members with multiple hits — two each. Sydney Keech, Laci Campbell, Tucker and Davis all had two RBIs as well.

The Panthers (2-3, 1-0 1A Coastal Plains Conference) saw the Hurricanes (0-3, 0-1 1A CPC) storm out to a three-run lead in the top half of the opening inning, before scoring a run of their own in the bottom of the first. Pamlico County held a 3-1 lead into the third, when Northside scored eight times before adding two more runs in the fourth.

The Hurricanes plated three runs in the fifth to make the score 11-6, but the Panthers responded with five runs of their own in the bottom of the inning to push their lead to 10 runs and end the game.

It was a balanced effort at the plate for the Panthers, as they collected 18 hits and 15 RBIs, and seven different hitters finished with multiple hits. Cameron Rose was 4-for-4 with three doubles and four RBIs, while Elyse Brinn, Rylie Norman and Kathleen Slade all had multiple RBIs as well, finishing with four, three and two, respectively.