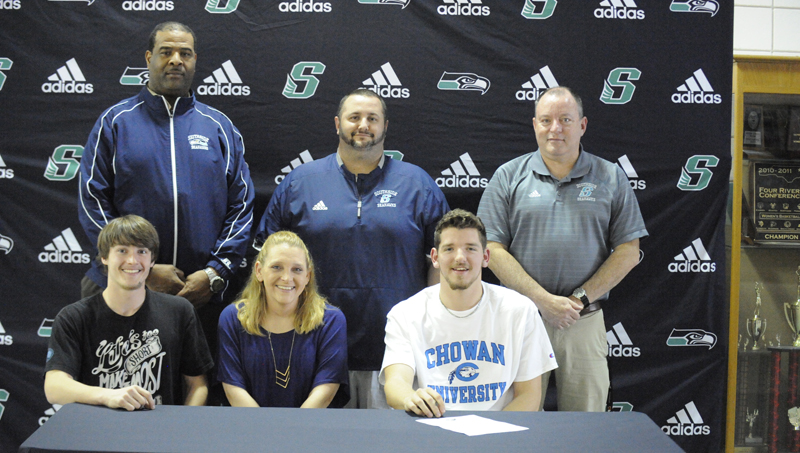 CHOCOWINITY — Hunter Tyler has come a long way since he began playing football for Southside three and a half years ago. After not being able to block a senior during practice as a freshman, which served as a point of motivation to get better, Tyler now finds himself with the opportunity to play for Chowan University next season after signing to play for the Hawks in front of family and friends this afternoon at Southside.

“I was really excited for the opportunity that I was given (to play college football),” the 6-foot-4-inch tight end said. “This was a big thing for me because I always wanted to play football and continue on playing football.”

Tyler said that humbling practice all those years ago helped drive him to put in extra work year around to improve himself.

“I wasn’t able to block him and he was just kind of throwing me around a little bit. But I’d get mad. I knew that I should be able to block anybody that they put in front of me,” said Tyler, who is undecided on a major but is leaning toward engineering.

Tyler received offers from Division-III schools as well, but chose Chowan due to the fact he felt it would be a good fit for him and the Hawks reached out to him the most, making him feel wanted.

The Hawks’ coaching staff told Tyler he would need to gain about 30 pounds to play at the next level, but with his dedication to hard work and bettering himself, it shouldn’t be too much of a problem for Tyler.

According to Tyler’s mother, Janice Tyler, and Jeff Carrow, Southside’s head football coach, the soon-to-be college football player has been grinding away in the gym, even after his senior season came to an end.

“He’s worked extremely hard in the past two years in the weight room. He’s still into weightlifting right now, working hard,” Carrow said. “He’s dropping his speed to get it up for the college level and really working hard on his upper-body strength right now. Past his senior year, given the opportunity to go somewhere else, he’s still working. Again that speaks on him and how he’s been for four years for us; he’s just an outstanding guy.”

Having been a starter at tight end for the last three and a half years, Carrow said Tyler will leave a large hole to fill for the Seahawks, but the coach is thrilled for the chance Tyler is getting.

“I’m really happy for him and his family for the opportunity to move on to the next level,” Carrow said.