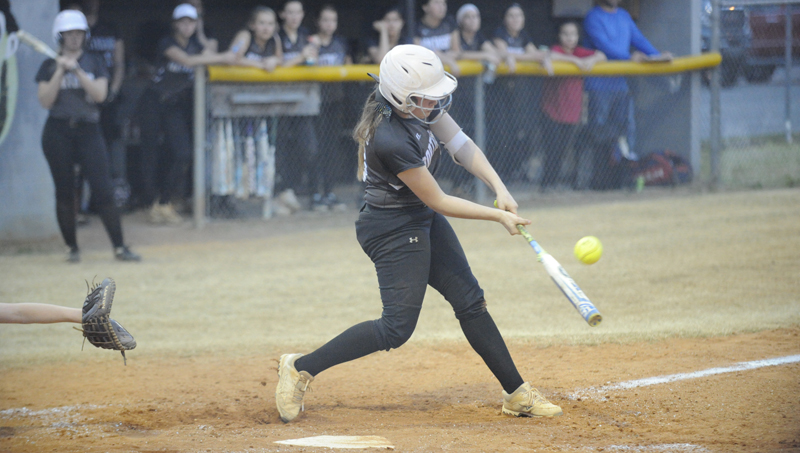 SOLID CONTACT: Northside’s Teagan Pilgreen connects for a hit against Riverside Friday. The senior finished 1-for-2 with an RBI in a 6-0 win. (Sean Finnerty | Daily News)

PINETOWN — After a 0-3 start to the season, Northside’s early troubles now look to be in the rearview mirror. The Panthers bounced back from their sluggish start to win each of their next three games by at least 10 runs, but faced a real test Friday when they welcomed undefeated Riverside into town.

Northside passed with flying colors, turning in a complete performance against last year’s conference co-champion for a 6-0 victory that pushed the Panthers’ winning streak to four games and put their record above .500 for the first time this year.

“They did a great job; they played the best game of the year,” Northside head coach Eric Slade said of his young team that graduated seven productive seniors from last year’s squad that tied Riverside in the conference and reached the fourth round of the playoffs. “Madison (Braddy) pitched outstanding, we did the little things right, we laid the bunts down when we had to, we got the breaks with the hits when we needed them. Game could’ve gone either way with a hit here or a hit there, but we were on the right side tonight and played a very good team.”

After Braddy got through the Riverside (4-1, 1-1 1A Coastal Plains Conference) lineup in the top of the first, Northside (4-3, 2-0 1A CPC) got right to work establishing a lead. Rylie Norman led off for the Panthers, using her speed to great effect. Norman reached first on an infield single before stealing second. An Elyse Brinn sacrifice bunt moved her to third, before a Kathleen Slade bloop single that dropped beyond Riverside’s backtracking second basemen brought Norman home for the game’s first run.

The Panthers tacked on three more runs in the third to extend its lead to four runs. With the bases loaded, Northside’s hottest hitter, Cameron Rose stepped to the plate. Having hit nine RBIs in the past three games Rose added two more with a single in the 5-6 hole. With a 3-0 lead and runners on the corners, Teagan Pilgreen followed with a sacrifice bunt, completing the inning’s scoring.

While the Panthers were putting up runs, Braddy, with the help from her teammates in the field, made sure Riverside’s bats were quiet. The junior surrendered only three hits in the shutout win, striking out five Knights. When Riverside did manage to put the ball in play, there was a Panther there to make the play and make the out.

Northside tacked on two insurance runs in the sixth, as Pilgreen led off with a bloop single into shallow centerfield. Taylor Chase then reached base with a bunt and took second after Pilgreen got herself into a pickle but reached third safely after the ball was dropped on the tag. Braddy drove Pilgreen home with a groundball past the scrambling Riverside shortstop and Amelia Woolard followed with an RBI-single, bringing home Chase.

Northside had nine hits with seven different Panthers recording a hit. Norman and K. Slade led Northside with two hits each, as Rose’s pair of RBIs paced the Panthers.

Riding a four-game winning streak after dropping the first three games of the season, E. Slade credits the hard work his team, which contains just three seniors on the roster, put in to get back on track.

“I think they were young, we were a little rusty and they had kept working hard. Hard work pays off. We’re not great by any means yet, but we’re getting better every game and that’s all we can ask for,” E. Slade said. “I think that we’re in really good shape. I thought that they (the Knights) were an outstanding test and they’re a great team. The score doesn’t show how good a team they were; we just got all the breaks tonight.”