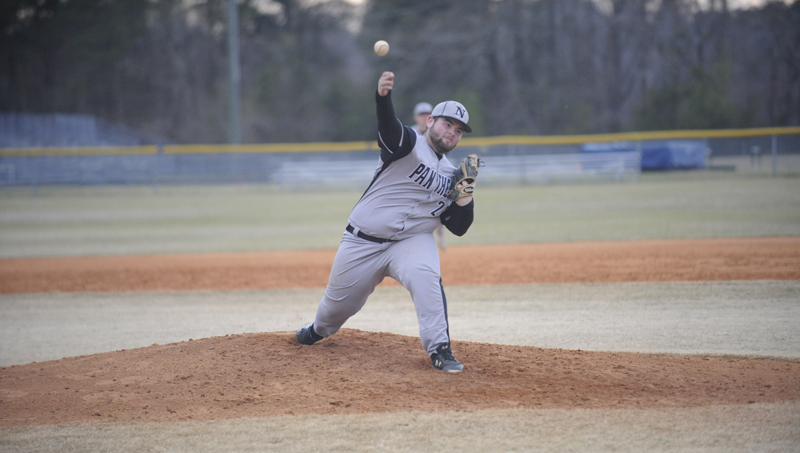 WHAT A RELIEF: Panther Matthew Adams releases a pitch during yesterday’s victory over Bertie. The junior held the Falcons to no runs and two hits in 2.1 innings of relief, picking up the win for Northside. (Sean Finnerty | Daily News)

PINETOWN — The wait is finally over for the Panthers. After opening the season with seven successive losses, Northside battled back from two separate five-run deficits yesterday to come away with a 13-8 victory over Bertie at home.

The Panthers (1-7, 0-2 1A Coastal Plains Conference) have struggled to generate offensive production at times this season, scoring more than three runs just twice before yesterday’s game. After falling behind early, partly due to self-inflicted wounds, Northside found its groove at the plate, finishing with 13 hits and 10 RBIs, while coming up with hits in crucial situations.

“We started off kind of rough, errors and things that have been killing us the whole year, but our bats woke up and we ended up settling down in the field,” Northside head coach Keith Boyd said. “We’ve been getting down all year long, so (we) get down 5-0 and we started plugging away and got it down to 8-3. Just didn’t quit and kept hitting the baseball and got some timely hits when we needed them.”

Bertie (1-5 2A Northeastern Coastal Conference) led off the first by scoring five runs. The Falcons collected three hits in the inning, but were helped along by a pair of Northside errors and a couple of wild pitches.

After getting no one on base in the bottom of the first, the Panthers began their comeback in the second, scoring three runs. Dawson Boyd led off with a base hit and a pair of walks loaded the bases for Tyler Harris. The sophomore, who finished 2-for-3 at the plate with three RBIs, cleared the bases with a double to left field.

Bertie came right back in the top of the third, hitting two singles and two doubles to score three runs and reestablish its five-run lead at 8-3.

The Falcons’ immediate response didn’t faze Northside one bit. The Panthers came right back and scored four runs in the bottom of the third to bring themselves within one run at 8-7. Northside quickly loaded the bases, thanks to base hits from Tyler Modlin and Douglas Dixon, as well as a drawn walk by Dawson Boyd. Base hits from Carter Boyd and Harris, combined with another walk and a hit batter, brought home Northside’s runs in the inning.

The pitching of Matthew Adams, who picked up the win in relief of Carter Boyd, and Ryan Cornelius helped neutralize the Falcons’ bats, as they combined to hold Bertie to no runs and three hits over the final 4.1 innings.

With Bertie’s bats silenced, Northside continued its momentum on offense, scoring two runs in the fourth and four more in the fifth. A Bertie error on a sharply hit ball by Adams allowed Dawson Boyd to tie the game. Two batters later, Caleb Alligood hit an RBI-single to right field, scoring Adams and giving the Panthers the lead.

Alligood provided three of Northside’s insurance runs in the fifth, hitting a three-run double with the bases loaded, after Adams hit an RBI-single earlier in the inning.

Northside has shown improvement throughout the season, resulting in its first win. But the Panthers’ coach knows his young team needs to sharpen up some more in order to get some more victories.

“They’re not going to quit, and our pitching is getting better and better, getting more consistent with it,” Keith Boyd said. “We’ve just got to become more consistent in the field and we continue to grow. I’m not saying we’ll set the world on fire, but we’ll be in them; maybe we can steal a few here and there.”