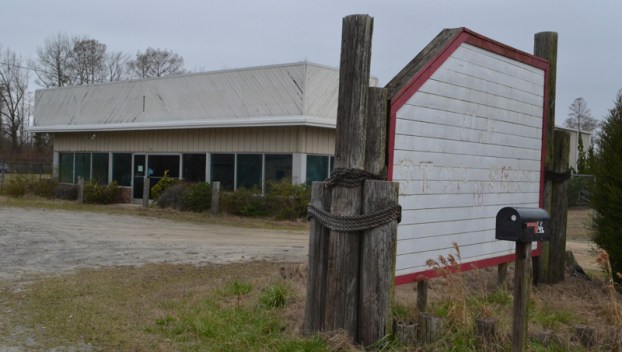 FUN ZONE, PART II: In a proposal approved by the Washington Board of Adjustment last Thursday, Backwater Jack’s owner Laura Scoble shared a vision for indoor and outdoor recreation opportunities at the former site of Park Boat Company on N.C. Highway 17, south of the Pamlico River. (Matt Debnam/Daily News)

A new business endeavor on N.C. Highway 17 aims to rehabilitate a dilapidated building and bring a new family friendly recreation venue to Washington.

During last Thursday’s meeting of the Washington Board of Adjustment, local business owner Laura Scoble sought and obtained a special-use permit to operate a social club in the city’s extraterritorial jurisdiction on the south side of the Pamlico River.

“This is a project I’ve been thinking about for over 20 years,” Scoble said. “Twenty years ago, with some friends, I went to Amsterdam, and we went by Anne Frank’s house, and we found a little ping-pong bar. It was the cutest thing I had ever seen, and I was hooked from then.”

Highwater Social, as the new club will be called, will operate on a piece of property on N.C. Highway 17 that was home to Park Boat Company from 1985 until 2007. The property, owned by Smithwick Enterprises, has been vacant for the past few years after a retail business at the location closed.

Plans submitted to the Board of Adjustments show a bar and music venue in what was once the boat company’s showroom, with room for ping-pong tables, darts and other games. A large kitchen and dining room space behind that would provide plenty of room for indoor activities, including kids’ birthday parties, according to Scoble.

“I wanted to have a place that would appeal to a lot of different people,” Scoble said. “The idea is to give families something to do.”

Beyond the confines of the building, the outdoor opportunities at the site are considerable — located on more than four acres of land, Scoble plans to incorporate activities such as corn hole, bocce, volleyball, fowling (a combination of football and bowling) at the property. A fire pit, an artificial outdoor skating rink and a music stage will likewise add to the club’s offerings, along with water access to the Tar River just north of the U.S. 17 business bridge.

“I believe that’s just part of the recreation that needs to happen in a civilized society,” Scoble said.

As far as the business model, the Highwater Social will operate on a private club model — a small fee for membership, then a standard charge of $5 per day-long visit, with only a slightly higher charge for special music events.

“Highwater Social is all about entertainment,” the special use application reads. “We are the place you go to let go, be playful and experience something new and exciting — the place you go to meet up with friends and family … Highwater is the social playground for everyone.”

With a building engineer retained to help navigate the permitting process, Scoble says that she hopes to see Highwater Social open for business this summer.

What do Washington High School students and the 1970s Swedish pop band ABBA have in common? Both will be featured... read more