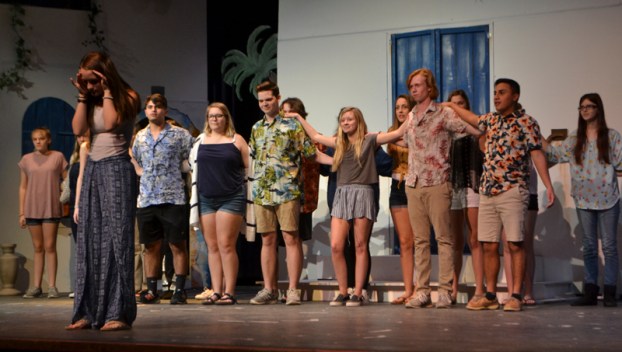 TOO MUCH: Leading lady Sophie Sheridan, here played by Callie Smith, holds her head in frustration during a musical number performed by the cast. (Matt Debnam/Daily News)

What do Washington High School students and the 1970s Swedish pop band ABBA have in common? Both will be featured on stage this weekend at WHS as the school presents its annual spring musical “Mama Mia!”

The play tells the tale of a 20-year-old bride-to-be, Sophie, and her journey to determine which of three men from her mother’s past is her true father before her wedding. With a score of 21 musical numbers from ABBA, the show promises quality entertainment, and has been years in the making at WHS.

For WHS art teacher Melissa Moore, the dream of bringing “Mama Mia!” to the local stage dates back to a 2005 trip to New York, where she and retired teacher Penny Paul took students to see the show on Broadway. They fell in love with the musical and decided they wanted to bring it back to Washington.

“It’s kind of sad that she’s not going to be here doing that with me, but she’ll be here to support,” Moore said.

For the past three months, the cast of 28 students, along with a dedicated technical crew and costume design has been working to bring the musical to life. From choreography and costumes to set building, lighting and sound, students are involved in every aspect of the performance.

“The kids have been working extremely hard, with a lot of long nights,” Moore said. “They’ve been practicing pretty much every day since January.”

Drama teacher Lauren Thefaine is directing the musical, while Moore is coordinating technical details such as sets and costumes, and band director Kyle Crudup is assisting with the musical numbers. While this is Telfair’s first time directing the spring musical at WHS, Moore has been involved with the annual performance to varying degrees for the past 15 years.

“This is something that has been going on for 35-plus years, and it’s important for me, as long as I’m here, to help keep it going,” Moore said.

The show comes to the WHS stage three times this weekend, with 7 p.m. shows on Friday and Saturday and a 3 p.m. matinee scheduled for Sunday. Tickets are $8 in advance or $10 at the door, and all proceeds from ticket sales help support the program moving forward.

Art Walk introduces a search for the poetic