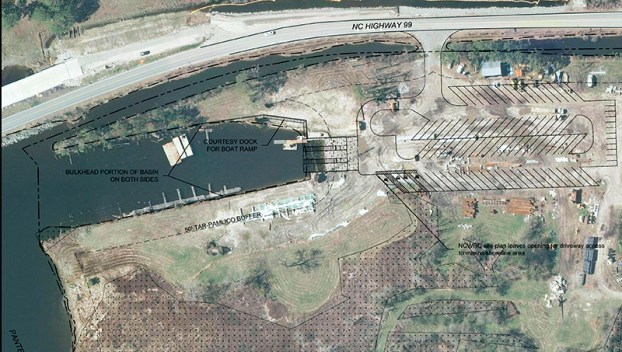 Known as the Cooperage Tract, the county-owned land on the Belhaven waterfront was floated as a location for a new, larger boat ramp several years ago. (Beaufort County Government)

County commissioners have agreed to move forward with selling 40-plus acres of Belhaven waterfront property, with conditions.

The Board of Commissioners unanimously voted to start a bid process in response to interest by a local developer in building an RV park on the property. However, taking permitting and construction into account, the purchaser will have a deadline of two years to act on the project. Otherwise, the property must be returned to the county.

“I think we go as far as we can with the developer who wants to develop it and get it back on the tax roll,” said Commissioner Gary Brinn.

The prospect of an RV park falls in line with the intended use of the property, according to Commissioner Frankie Waters.

“There’s been a lot of suggestions, but nobody has come to the table with money,” Waters said.

Waters said he’d like to see the county sell the land and put the money in a capital fund to use to fix the railroad tracks running through the property, as well as renew talks with the North Carolina Wildlife Resources Commission about partnership for boat ramps and parking on the remaining acreage.

The property, known as the Cooperage Tract, was donated to the county in 2016 with the intention, but no requirement, of it being used for public access to Pantego Creek. At the time, the Belhaven Board of Aldermen disagreed with a NCWRC-planned partnership, citing the land could be used in a better way — one that would bring more jobs to the area.

Commissioners agreed to reach out to the Belhaven Board of Aldermen to ensure they’re on board with the new plan.

The Cooperage Tract is a designated Brownfields site, meaning its future use has been affected by real or perceived environmental contamination based on its past industrial or commercial use, according to the EPA definition. Brownfields officials indicated contamination from its past use by a fertilizer company can be dealt with by natural methods — “just letting it sit,” according to county Manager Brian Alligood.

Commissioners also unanimously voted to pursue the pre-application process with NCWRC for a boat ramp/parking grant.