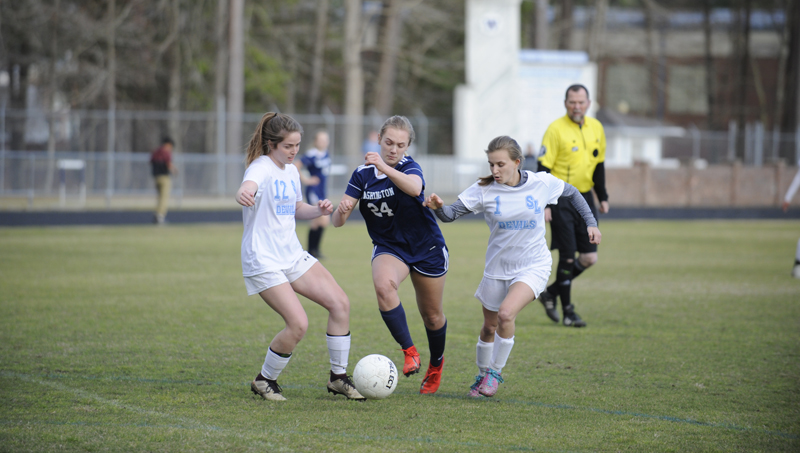 WASHINGTON — It was another solid night for the Washington girls soccer team, as the Pam Pack cruised to a 9-2 win over conference foe West Craven last night at Wagner Stadium. Despite the score indicating a blowout, there were plenty of things Washington head coach Ed Rodriguez didn’t like about his team’s performance.

“We didn’t come out as sharp as we should’ve,” he said. “We didn’t dictate the pace of the game at the beginning. The weather played a factor in us being out of rhythm because we didn’t play last week. It’s good to get a win, but I still think we could’ve played a much better game.”

Washington (6-3, 3-0 2A Eastern Carolina Conference) played on the front foot against the Eagles (1-5, 0-3 2A ECC) for most of the night. Led by sophomore attacking midfielder Lilly Frances Lobos — who scored five of her team’s nine goals in yesterday’s contest— the Pam Pack have been at the top of the conference standings early in the season. Lobos scored a first-half hat trick started by a free kick goal that set the tone for the night. She scored again after weaving through the Eagles’ midfield and defense to double the Pam Pack’s lead.

The Pam Pack led 4-1 at halftime after a scramble in the box led to a goal by sophomore Rebecca Zerniak. The winger also contributed with three assists, providing creativity on the right flank throughout the game. Lobos’ third goal came late in the first half to put Washington firmly in control of the match. West Craven played with a lot of effort, but was outmatched against a fast-paced Pam Pack squad looking to repeat as conference champs for the sixth-consecutive year.

Lobos continued her torrid scoring pace in the second half, getting two more goals, including an incredible strike into the top left corner of the net. She now has 31 goals and 10 assists in nine games to start the 2019 season after scoring 48 goals as a freshman last season. Junior forward Alyssa Villegas also scored twice in the second half and senior midfielder Claire Shepard also got on the scoresheet.

“My team has my back,” Lobos said. “Seeing all of my teammates grow makes me want to grow my game. They’ve really helped me become a better player. It’s a lot easier to score since I have great teammates that put me in the right positions to succeed. In this game, we wanted to improve on a lot of things. I think we have to make more connections defensively and string some passes together to become a better team.”

While the Pam Pack has scored plenty of goals so far this season — 52 goals through nine games — Rodriguez feels his team can stand to improve on the other end of the field.

“We can’t concede goals the way that we did tonight,” Rodriguez said when asked about improvements his team could make. “Defensively, we have to be more consistent as a team. In conference, the competition is pretty good, but in the playoffs it’s even more difficult. Defense is the name of the game in this sport.”

The Pam Pack returns to action Friday when it travels to take on Greene Central at 6 p.m.