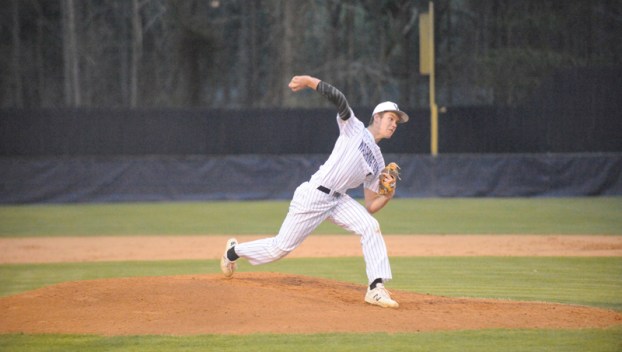 CREAM OF THE CROP: Washington's Hunter Hall has been one of several standouts so far this spring. (Sean Finnerty | Daily News)

After five weeks of play, the spring sports season is just about at its halfway point. Of course, Mother Nature has played her part — with cold and miserable rain forcing the cancelation or postponement of games — meaning teams will have to play the remaining half of their schedules in the span of four weeks.

Once again, Pam Pack softball is leading the way for Beaufort County athletics, as Washington stands at 10-0 so far this season. The Lady Pam Pack’s hot start to the season has the team ranked No. 7 in the state by MaxPreps, as of today.

The Washington baseball team also enjoyed a successful start to its campaign and is currently tied for first in the conference with a 5-1 record in league play and overall record of 9-3. The Northside softball team endured a turbulent start to the season, losing its first three games of the year. But the Panthers have since won eight of nine games and sits in pole position in the 1A Coastal Plain Conference standings heading into today’s game with Jones Senior.

Despite having a roster with only one senior and 10 underclassmen, the Washington soccer team has continued its dominance in conference play and currently holds a 6-3 record.

Southside’s baseball and softball teams have both experienced inconsistent seasons so far, putting together a strong performance one night and shooting themselves in the foot on another. Having to replace nine seniors from last year, Northside baseball lost its first seven games in 2019. But the young Panthers are constantly improving and have won three of their last five.

Here are the standouts from the first half of the spring season:

There has been no better baseball player than Hunter Hall in Beaufort County or the 2A Eastern Carolina Conference. Hall has been a driving force for the Pam Pack, impacting the game as both a hitter and ace pitcher. The senior has been on fire at the plate in the first half of the season and leads the conference in five offensive categories: batting average (.562), doubles (8), extra-base hits (9), slugging percentage (.875) and RBIs (18).

Hall has also been dominant at the mound. His six wins — in six starts — are tops in the 2A ECC, as well as his ERA (0.81) and strikeout total. In 34.2 innings of work, he has racked up 67 strikeouts and is holding opposing batters to a paltry batting average of .128. 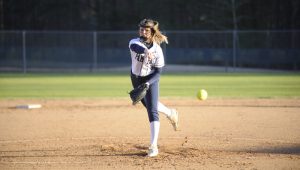 TEAM ACE: Pam Pack pitcher Abbi Tucker once again been one of the most dominant athletes in Beaufort County this spring. (Sean Finnerty | Daily News)

Hall isn’t the only dominant pitcher enrolled at Washington. Over on the softball field, Abbi Tucker is frustrating batter after batter as well. In her third year as the Pam Pack’s No. 1 pitcher, the junior’s commanding performances in the pitcher’s circle are nothing new. A perfect 9-0 in nine starts, Tucker has gone the distance six times and has four shutouts on the season so far. Her 1.31 ERA and 72 strikeouts in 59 innings are both tops in the conference. She is more than just a pitcher, as she also holds a .450 batting average with three doubles and 11 RBIs. 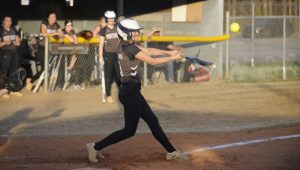 VERSATILE ATHLETE: Kathleen Slade has been Ms. Do-it-all for Northside this season, providing steady defense at shortstop, coming up with extra-base hits at the plate and even throwing a no-hitter. (Sean Finnerty | Daily News)

Kathleen Slade is another Beaufort County athlete impacting the game in a myriad of ways. Normally the starting shortstop, Slade provides reliable defense and has been hitting well. Going into today’s matchup with Jones Senior, the sophomore was batting .486 and led the 1A CPC in triples (4), extra-base hits (10) and was tied for must runs (20). She also ranked third in doubles (6), RBIs (15) and slugging percentage (.865).

An injury to starting pitcher Madison Braddy has recently forced Slade to help her team out by pitching and she has excelled. Slade is 3-1 as a starter and the only loss was to Washington. With 28 strikeouts in 28.1 innings, Slade holds a 1.73 ERA. But the highlight of her time as a pitcher was a no-hitter she threw against rival Southside. 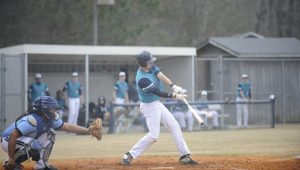 STEADYING FORCE: Will Warren has been a constant for Southside in what has been an inconsistent season so far and leads the conference in slugging percentage while also having one of the highest batting averages. (Sean Finnerty | Daily News)

Senior Will Warren has been the steady hand for the Seahawks in what has been an up-and-down season so far. Having come up with at least one hit in nine of Southside’s 10 games, his .484 batting average is fourth best in the conference. Proving himself to be one of the most productive batters in the 1A CPC, Warren leads the league with two triples and a .645 slugging percentage. Warren was also on the mound for Southside’s best win of the season, throwing a complete-game shutout at Tarboro, striking out five Vikings in the 5-0 win. 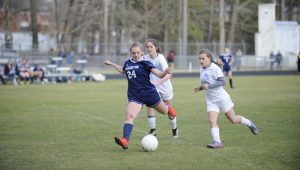 UNSTOPPABLE: Pam Pack attacking midfielder Lilly Frances Lobos has been on a tear so far this season, terrorizing defenders with her skill and speed. (Sean Finnerty | Daily News)

Having burst on to the scene last year scoring 48 goals and producing 24 assists as a freshman, Lilly Frances Lobos is on track to surpass those numbers this season. After playing last year on the left wing, Lobos has shifted more centrally as an attacking midfielder this year and the move is paying immediate dividends. Now with more freedom to move about the field to utilize her skill and creativity, Lobos has been a menace to opposing defenders. In just nine games the sophomore has scored 31 goals and set up 10 more and leads the conference in goals and assists. 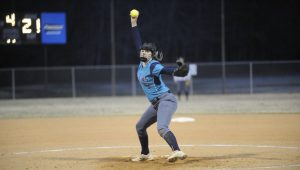 WHO NEEDS EXPERIENCE?: Southside freshman Marah Gottwalt couldn’t have started her high school career much better, as she leads the 1A CPC in several offensive categories including home runs. (Sean Finnerty | Daily News)

Similar to Lobos last season, Marah Gottwalt has been highly productive in her freshman year on the Southside softball team. She was nearly perfect at the plate during the first five games of the season, going 16-for-18 in that span. She has already established herself as one of the premier power hitters in the conference, as she leads the 1A CPC in home runs (2) and slugging percentage (1.133) and has also belted five doubles and a triple. Gottwalt is also tied for the highest batting average (.700) and most runs (20) and her 16 RBIs are second best in the league.

WASHINGTON — Errors have been an issue at times for Washington this season, directly causing two of the Pam Pack’s... read more